They always say you should never give up on your dreams, but what if your dream isn’t worth fighting for? What if it turns out to be a nightmare?

It turns out I wasn’t chasing a dream at all. I was chasing a fantasy, but it took me a little while to see the difference. It’s obvious in retrospect and I feel like an idiot – but there’s nothing unusual about that. 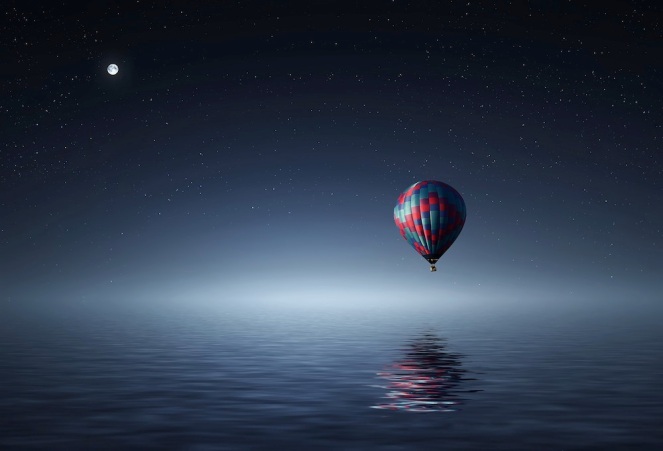 So what is the difference between a dream and a fantasy?

A dream is something that gives true expression to who you already are in this moment. You’re living your own dream right now – making yourself up as you go along. If you get still and silent enough inside, you can see the next step and allow it to come forth. This is the real meaning of Zen spontaneity and freedom.

You dream yourself into existence. You’re always doing it, even if you’re not aware of it. But becoming conscious of the process allows you to participate more fully. Some say it allows you to control the dream, but I would lean more towards the idea of co-creation.

You’re not really in charge of this process – it happens through you. It’s your job to allow it, to get your pesky little ego out of the way and allow your soul to speak. I’ve written a whole book about this!

A fantasy is what your ego substitutes for the above when it gets scared and lost and confused and thinks it has to turn itself into SOMEBODY. A fantasy is driven by fear and insecurity and lack and loss. It’s a desperate attempt to flee from the void at the heart of existence, but it’s that void – the unknowable mystery – that births the universe, i.e. you.

To pursue a fantasy in lieu of a dream is to deny your own soul. It’s to knife yourself in the chest, to turn away from life and truth and plunge headlong into the abyss of nihilism or the grandiosity of inflation.

But disillusionment is the beginning of wisdom. I had been living inside an illusion and failure woke me up. I found myself standing in a minefield littered with self-deception and unrealistic expectations.

The stupid thing was, most of what I saw on that minefield was already familiar. I knew I was insecure and neurotic. I knew I lacked self-belief and gave up too easily and allowed my self-doubt to spoil my fun. But I also saw that the implosion of my publishing fantasy was a good thing because:

Publishing is where dreams go to die.

My dreams – specifically. It’s perfectly possible that your dream of being published is quite feasible and would be absolutely the right thing for you to do.

However, I write Visionary Fiction which the publishing industry generally won’t touch with a ten-foot pole. The fact that The Shining Ones is also a fantasy thriller is beside the point – it contains ideas that aren’t considered marketable, so in publishing terms that makes it a dead book. They have no use for it.

The book may be technically good enough to be published (according to editors who have looked at it), but ‘publishable’ these days means ‘commercial.’

And that means lowest common denominator. It means fear and sex – thrillers, crime, erotica, romance, and nostalgia. It means diet books and cookery books and colouring books and ‘ironic’ bullshit Ladybird books that are supposed to be funny but only actually are if you’re an emotionally repressed middle-class drone on the verge of an existential crisis.

It means books ‘written’ by people who are popular on YouTube (the horror!).

When nations grow old, the Arts grow cold,
And Commerce settles on every tree.
– William Blake, On Art and Artists

I don’t want this to sound like bitter ranting (even though that’s exactly what I’m doing 😉 ) or sour grapes. I’m grateful I woke up to my foolishness in time. I may have just dodged a bullet.

Who knows? Maybe if I had continued sending the book out to agents, I would have landed a deal. I would eventually have lifted the right stone and out would have crawled a lunatic who believed they could sell the book. And an equally certifiable publisher would have been found. What then?

I would have rewritten the book (yet again), only this time I would have stripped out anything the ‘experts’ considered problematic – in other words, anything that made the book less likely to sell. I may have ended up with a totally different book. It might even have been a better book.

I might have become a better writer too. I would certainly have learned a lot in the process. But at what price?

I would have ripped out the heart of a book I used to love and would then have to sell its maimed corpse to the public – who couldn’t care less and just want something they can consume without having to think too hard.

And I probably wouldn’t even make that much money out of it (by way of compensation for my sacrifice).

“…the chances of earning a living are about equal between self-published authors and traditionally published authors. The chances are equally bad, that is. Very few earn a full-time living making art. But consider this: On one side of this comparison, you have a group of lottery winners who got lucky and scored that publishing contract. You have the 1% of winners. On the other side of the comparison, you have all the chumps who decided to stop being chumps and make their stories available to the world.” – Hugh Howey

The real problem here is expectations. I haven’t really failed. I can still write and self-publish. I can still do what I love. The only thing that failed is something that never would have worked in the first place – a stupid fantasy about publishing.

This is excruciating, but let’s look into the quicksand of my neuroticism to figure out where I went wrong. Why did I want to get published?

Now the verdict on each fantasy:

The verdict: I was running away from something.

I realised how much of what I’d been doing was bound up with the need to prove my right to exist. Everything I had ever done was an attempt to create an identity – to be somebody, achieve something – so I could prove I had a value. That I wasn’t just taking up space or wasting oxygen.

This is one of those pernicious cultural introjections that destroys your sanity without you noticing.

But it’s more than that. The current cultural worldview may be insane, but it only reflects the insanity at the heart of the human mind. We have created a world in our image. Everything we do is an attempt to reconcile with an existence we don’t understand.

The real shock was realising that I was using my spiritual practice in the same way as everything else in my life. I had created a ‘spiritual identity’ and was busy trying to hide inside it. Hide from what?

The void – the fact of non-being – the unknowable mystery.

This void at my centre is the thing I’ve been avoiding my whole life by trying to prove my existence.

And the culture in which I live is no different. The incessant activity, the striving for dominance, conquest, happiness, success, money… whatever. It’s all a distraction, a collective panic in the face of what we can’t accept.

This is what the dark night of the soul does: it strips you of everything that will, in time, turn to dust – and for that, I’m grateful. The writing vs. publishing conundrum is a sideshow, a distraction. The book is almost irrelevant.

That doesn’t mean it’s not important or that it doesn’t matter. Creativity is the essence of life. To turn my back on creativity and imagination would be to let the soul-sucking demons win. Mammon can feast on his own stumps for all I care.

So the dream of publishing is dead.

At first, the decision to quit made me miserable. I felt like a failure. I wondered if I would ever write anything ever again. It fed my self-hating demons and they gleefully laughed in my face: See! I knew you would fuck it up, like you fuck everything up…

And then right on cue, another synchronicity appeared to bounce me back into my right mind: Out of the blue, I received a card. My parents had been to an exhibition where they saw this image – ‘I want! I want!’ by William Blake – and it made my mother think of me, as she explained:

“I thought of you reaching for the moon, for your dreams…”

I looked at the image of the man with his insane ladder stretching all the way to the moon, and it felt like a slap in the face. I had just given up on my dream and here I was being prodded into thinking I had made a mistake. It rubbed salt into the wound and the self-hating demons squirmed with delight.

But then I went online to find out more about the image. It’s an engraving from a book for children called The Gates of Paradise, and the original is tiny – only 5 x 6 cm. Maybe the figure lusting after the moon is crazy, but William Blake understood the power of the imagination and dreams. Reconnecting with his vision helped to remind me what mattered:

You don’t need a ladder to reach the moon.

“Imagination is the real and eternal world of which this vegetable universe is but a faint shadow.” – William Blake

Surrender to the Winemaker