Last time we looked at some of the forms of the Dark Night of the Soul. Here we continue the extracts from Evelyn Underhill’s Mysticism to explore the final and most challenging step of the dark night, that of the death of the self: 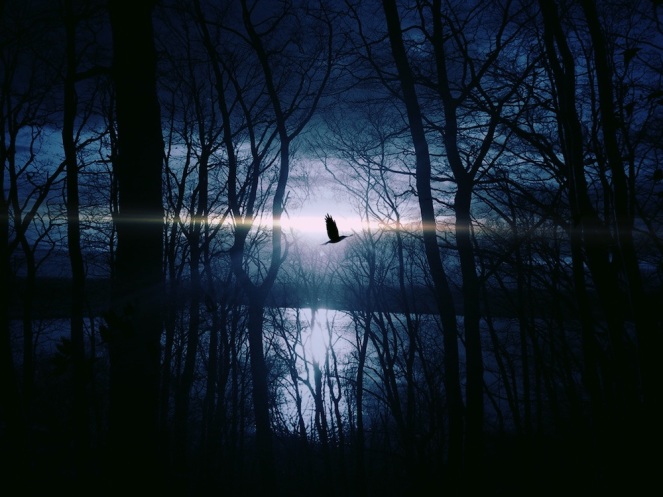 “The various torments and desolations of the Dark Night constitute this last and drastic purgation of the spirit; the doing away of separateness, the annihilation of selfhood, even though all that self now claims for its own be the Love of God. Such a claim … is felt by these great spirits to sully the radiance of their self-giving love.”

“All that I would here say of these inward delights and enjoyments,” says William Law, “is only this: they are not holiness, they are not piety, they are not perfection; but they are God’s gracious allurements and calls to seek after holiness and spiritual perfection … and ought rather to convince us that we are as yet but babes, than that we are ready men of God. … To sum up all in a word: Nothing hath separated us from God but our own will, or rather our own will is our separation from God. All the disorder and corruption and malady of our nature lies in a certain fixedness of our own will, imagination, and desire, wherein we live to ourselves, are our own centre and circumference, act wholly from ourselves, according to our own will, imagination, and desires. There is not the smallest degree of evil in us but what arises from this selfishness because we are thus all in all to ourselves. … in all this show and glitter of virtue, there is an unpurified bottom on which they stand, there is a selfishness which can no more enter into the Kingdom of Heaven than the grossness of flesh and blood can enter into it. What we are to feel and undergo in these last purifications, when the deepest root of all selfishness, as well spiritual as natural, is to be plucked up and torn from us, or how we shall be able to stand in that trial, are both of them equally impossible to be known by us beforehand.”

“The self, then, has got to learn to cease to be its “own centre and circumference”: to make that final surrender which is the price of final peace. In the Dark Night the starved and tortured spirit learns through an anguish which is “itself an orison” to accept lovelessness for the sake of Love, Nothingness for the sake of the All; dies without any sure promise of life, loses when it hardly hopes to find. It sees with amazement the most sure foundations of its transcendental life crumble beneath it, dwells in a darkness which seems to hold no promise of a dawn. This is what the German mystics call the “upper school of true resignation” or of “suffering love”; the last test of heroic detachment, of manliness, of spiritual courage. Though such an experience is ‘passive’ in the sense that the self can neither enter nor leave it at will, it is a direct invitation to active endurance, a condition of stress in which work is done.”

“Digging up the root of self-love with the knife of self-hatred” – here we see the mystical reason of that bitter self-contempt and sense of helplessness which overwhelms the soul in the Dark Night. Such a sense of helplessness is really, the mystics say, a mark of progress, of deeper initiation into that sphere of reality to which it is not yet acclimatized, and which brings with it a growing consciousness of the appalling disparity between that Reality, that Perfection, and the imperfect soul.” …

“The Dark Night then, whichever way we look at it, is a state of disharmony, of imperfect adaptation to environment. The self, unaccustomed to that direct contact of the Absolute which is destined to become the Source of its vitality and its joy, feels the “soft and gentle touch” of the Following Love as unbearable in its weight. The “self-naughting” or ‘purification of the will,’ which here takes place, is the struggle to resolve that disharmony; to purge away the somewhat which still sets itself up in the soul as separate from the Divine, and makes the clear light of reality a torment instead of a joy.

“So deeply has the soul now entered into the great stream of spiritual life, so dominant has her transcendental faculty become, that this process is accomplished in her whether she will or no; and in this sense it is, as ascetic writers sometimes call it, a ‘passive purgation.’ So long as the subject still feels himself to be somewhat, he has not yet annihilated selfhood and come to that ground where his being can be united with the Being of God.

“Only when he learns to cease thinking of himself at all, in however depreciatory a sense, when he abolishes even such selfhood as lies in a desire for the sensible presence of God, will that harmony be attained. This is the “naughting of the soul,” the utter surrender to the great movement of the Absolute Life, which is insisted upon at such length by all writers upon mysticism. Here, as in purgation, the condition of access to higher levels of vitality is a death: a deprivation, a detachment, a clearing of the ground. Poverty leaps to the Cross, and finds there an utter desolation, without promise of spiritual reward.

“The satisfactions of the spirit must now go the same way as the satisfactions of the senses. Even the power of voluntary sacrifice and self-discipline is taken away. A dreadful ennui, a dull helplessness, takes its place. The mystic motto, I am nothing, I have nothing, I desire nothing, must now express not only the detachment of the senses, but the whole being’s surrender to the All.

“The moral condition towards which the interior travail is directed is that of an utter humility. “Everything depends,” says Tauler, on “a fathomless sinking in a fathomless nothingness. … As the schoolmen say, when a new form is to come into existence, the old must of necessity be destroyed. … All strong rocks are broken here, all on which the spirit can rest must be done away. Then, when all forms have ceased to exist, in the twinkling of an eye the man is transformed. … In this lost condition nothing is to be seen but a ground which rests upon itself, everywhere one Being, one Life. It is thus, man may say, that he becomes unknowing, unloving, and senseless.”

“It is clear that so drastic a process of unselfing is not likely to take place without stress. It is the negative aspect of ‘deification’ in which the self, deprived of “perception, knowledge, will, work, self-seeking” – the I, the Me, the Mine – loses itself, denies itself, unforms itself, drawing “ever nearer” to the One, till “nothing is to be seen but a ground which rests upon itself” – the ground of the soul, in which it has union with God.”

“The ‘mystic death’ or Dark Night is therefore an aspect or incident of the transition from multiplicity to Unity, of that mergence and union of the soul with the Absolute which is the whole object of the mystical evolution of man. It is the last painful break with the life of illusion, the tearing away of the self from that World of Becoming in which all its natural affections and desires are rooted, to which its intellect and senses correspond, and the thrusting of it into that World of Being where at first, weak and blinded, it can but find a wilderness, a ‘dark.’

“No transmutation without fire, say the alchemists; No cross, no crown, says the Christian. All the great experts of the spiritual life agree – whatever their creeds, their symbols, their explanations – in describing this stress, tribulation, and loneliness, as an essential part of the way from the Many to the One, bringing the self to the threshold of that completed life which is to be lived in intimate union with Reality. It is the Entombment which precedes the Resurrection, say the Christian mystics; ever ready to describe their life-process in the language of their faith. Here as elsewhere – but nowhere else in so drastic a sense – the self must “lose to find and die to live.”

“The Dark Night, as we have seen, tends to establish itself gradually; the powers and intuitions of the self being withdrawn one after another, the intervals of lucidity becoming rarer, until the ‘mystic death’ or state of total deprivation is reached. So, too, when the night begins to break down before the advance of the new or Unitive Life, the process is generally slow, though it may be marked … by visions and ecstasies. One after another, the miseries and disharmonies of the Dark Night give way; affirmation takes the place of negation; the Cloud of Unknowing is pierced by rays of light.

“The act of complete surrender then, which is the term of the Dark Night, has given the self its footing in Eternity; its abandonment of the old centres of consciousness has permitted movement towards the new. In each such forward movement, the Transcendental Self, that spark of the soul which is united to the Absolute Life, has invaded more and more the seat of personality; stage by stage the remaking of the self in conformity with the Eternal World has gone on. In the misery and apparent stagnation of the Dark Night – that dimness of the spiritual consciousness, that dullness of its will and love – work has been done, and the last great phase of the inward transmutation accomplished. The self which comes forth from the night is no separated self, conscious of the illumination of the Uncreated Light, but the New Man, the transmuted humanity, whose life is one with the Absolute Life of God. …”

“So far, we have considered the Dark Night of the Soul from a somewhat academic point of view. We have tried to dissect and describe it, have seen it through the medium of literature rather than life. Such a method has obvious disadvantages when dealing with any organic process, and when it is applied to the spiritual life of man, these disadvantages are increased. … If we want to get a true idea of the Dark Night, as an episode in the history of a living soul, we must see it in its context, as part of that soul’s total experience. We must study the reactions of a self which is passing through this stage of development upon its normal environment the content of its diurnal existence; not only on its intuition of the Divine. …”

Underhill then goes on to discuss the experience of Suso and his quest to become a whole man: “Instead of the quiet cell, the secret mortifications, his selfhood was to be stripped from him, and the reality of his renunciation tested, under the unsympathetic and often inimical gaze of other men. The case of Suso is one that may well give pause to those who regard the mystic life as a progress in passivity, withdrawal from the actual world.”

The description of Suso’s experience is well worth reading – read the whole chapter here.

Next we’ll explore the true goal of the Mystic Way

One thought on “The Mystic Way 12: Ego Death in the Dark Night”