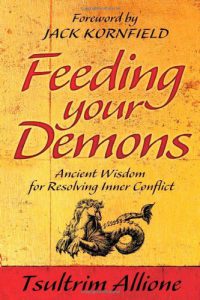 This week I’m reading Feeding Your Demons by Tsultrim Allione which offers a powerful technique for liberating yourself from negativity and fear. The book guides you through the five step process of feeding your demons which is based on the ancient practice of Chöd from Tibet.

Your demons are your fears and blind spots, negative emotions and self-defeating patterns of behaviour – in other words, your shadow. It seems counterintuitive to feed your demons, but actually it makes a lot of sense. Rather than denying or repressing difficult emotions, you turn towards them and make friends with them. That way, you can discover the real reason the demon was created and so heal the problem. If you try to attack your demons head on, they’ll fight back and cause more problems. But when you feed them, you treat them with compassion and understanding, and then they become your friends.

The book is full of examples from people of have successfully fed their demons and transformed themselves and their lives as a result:

“[Frances] was working with the feeling in her breast that had been frightening her for quite a long time. It felt as if a funnel in her breast was draining her life energy. The demon she saw when she took the second step was very big and black, a wolflike creature standing on his hind feet. He had a huge snout, sharp teeth, and red eyes, which were fixated on her. His fur crackled with electricity and every so often gave off a shower of white sparks, and he had long, razorlike claws.”

Frances felt very small compared to the demon and realised that he wanted her to serve him and only do what he wanted. This would make the demon feel powerful, big and strong. So Frances followed the steps and dissolved her body into a nectar of power and strength and fed it to the demon.

“He drank and drank, and as he did so his fur got lighter and lighter in color, until it was almost white. His eyes became blue. Finally he looked like a huge husky, gazing faithfully at her. He said he was her ally.

When she asked the ally how he would serve her, he answered that he wanted to give her his wisdom, which she could access by looking into his eyes. Frances was deeply touched by his obvious devotion to her as he lay down, placing his head on her knee.”

Some demons can be transformed quickly, like this one, but others take longer. Feeding Your Demons is a truly useful book which will help you to transform your fear and make friends with yourself. Highly recommended.

Related: Embracing Darkness: How to Feed Your Demons