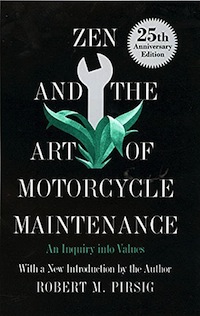 This week I’m reading Zen and the Art of Motorcycle Maintenance by Robert M Pirsig. It’s a curious book: not really a novel, more an excuse to philosophise about anything and everything, and likely to provoke many arguments and lots of feverish thinking.

The narrator of the tale sets out on a road trip with his son, meeting up with various people on the way. He spends a lot of time fiddling with his bike, listening for malfunction, trying to catch problems before they become problems and get the machine running perfectly. And he does the same with his mind, searching for answers to something forgotten and hidden in his past.

Everything that happens is really just an excuse to philosophise and discuss his ideas, and many of these discussions are conducted with himself – or rather, his past self or alter-ego: Phaedrus. This is who he was when he had taught writing at a college, but his obsession with the idea of “Quality” had driven him mad. After some extreme therapy, Phaedrus was banished into his subconscious, but slowly re-emerges throughout the course of the novel as he struggles to integrate what he has learned since.

“I told Chris the other night that Phaedrus spent his entire life pursuing a ghost. That was true. The ghost he pursued was the ghost that underlies all of technology, all of modern science, all of Western thought. It was the ghost of rationality itself. I told Chris that he found the ghost and that when he found it he thrashed it good. I think in a figurative sense that is true. The things I hope to bring to light as we go along are some of the things he uncovered. Now the times are such that others may at last find them of value. No one then would see the ghost that Phaedrus pursued, but I think now that more and more people see it, or get glimpses of it in bad moments, a ghost which calls itself rationality but whose appearance is that of incoherence and meaninglessness, which causes the most normal of everyday acts to seem slightly mad because of their irrelevance to anything else. This is the ghost of normal everyday assumptions which declares that the ultimate purpose of life, which is to keep alive, is impossible, but that this is the ultimate purpose of life anyway, so that great minds struggle to cure diseases so that people may live longer, but only madmen ask why. One lives longer in order that he may live longer. There is no other purpose. That is what the ghost says.”

The story is an enquiry into values and the search for meaning and the experience of what he calls ‘Quality.’ Quality seems to stand for the essence of experience, inherent in thought and being, but he also ties it to the idea of the dharma and virtue. He’s trying to show that being in the moment and being rational are perfectly compatible states. It’s not just a search for the meaning of life in abstract terms, but also in practical terms – how you actually go about living a meaningful life.

Zen and the Art of Motorcycle Maintenance is a novel that isn’t a novel. It’s also not really about motorcycle maintenance, or Zen. It’s a philosophical adventure, a ghost story, a man slowly unravelling as he goes mad (perhaps), and a study of the relationship between a father and a son. Make of it what you will.