A selection of recommended Philosophy books for anyone on the path to awakening and self-knowledge. These are some of the books I’ve found particularly interesting or inspiring over the years. There are longer reviews attached via links, and more to come…

David Edwards – Free to be Human

Subtitled Intellectual Self-Defence in an Age of Illusions. This book is about freedom, and the idea that there’s no greater obstacle to freedom than the assumption that it’s already been attained. In the West, few of us suffer physical restraint by the state, but we are constrained by powerful psychological chains, which are more effective because they’re so difficult to perceive. Corporately controlled mass media acts as a filter system which favours state and business interests, and this distorts our understanding of many personal, ethical and spiritual issues. This ensures that we remain passive, conformist, confused and uninformed – willing consumers bringing about our own self-destruction. Edwards argues that to counter this disinformation and disempowerment, we must master the arts of intellectual self-defence so we can challenge the deceptions of the system that puts profit before people. An inspiring book and urgently needed more than ever before.

This is a brilliant history of the imagination. Patrick Harpur explores the role of ancient myths in modern times and links together fields as far apart as Greek philosophy and depth psychology, Renaissance magic and tribal ritual, Romantic poetry and shamanism. He traces how myths have been used to make sense of the world and uncovers a tradition which alchemists imagined as a Golden Chain of initiates who passed their mysterious ‘secret fire’ down through the ages. Many societies still believe in an Otherworld of spirits, gods and daemons, which the West has pushed into the unconscious in a bid to ‘be rational’. But this visionary realm hasn’t gone away. It erupts from the shadows during times of transition. This inspiring and wonderful book shows how we can re-enchant our lives by getting back in touch with our secret fire and live with more imaginative insight. 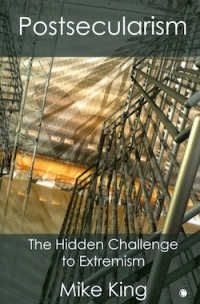 Postsecularism explores a way through the increasingly extremist worldviews that are causing us so many problems. During the 20th century, secular culture and religious faiths tended to ignore each other, but in the early years of the 21st century that changed. Conflict ignited between socially dominant secular thinkers and religious fundamentalism leading to a situation of extremists pitted against another from intractable positions. To move forward we can’t return to pre-Enlightenment beliefs so we must find a new worldview. Mike King identifies this as the postsecular. While retaining critical modes of thought, it returns to questions of the Spirit and provides a framework within which to move beyond extremism. This is an answer to religious extremism, but also to scientism and the unweaving of the rainbow. This is an important attempt to return meaning to the heart of human life.

Mary Midgley – The Myths We Live By

In this book Mary Midgley demonstrates that, far from being the opposite of science, myth is a central part of it. She shows that myths aren’t lies or just stories, but a network of powerful symbols that suggest particular ways of interpreting the world. They’re imaginative patterns that shape our mental maps and influence how we think. This usually happens without us being aware of it, so when a myth goes bad, they can do a lot of damage. Patterns of thought that are useful in one age can cause problems when times change. We don’t necessarily have to drop the old ideas completely, but they do need to be reassessed and reshaped to correct their faults. This book focuses on particular myths from the age of Enlightenment that are now giving us trouble, such as myths of freedom, progress, and individualism. If you want to understand the problems of civilisation this is a great place to start.

Richard Tarnas – The Passion of the Western Mind

This is a brilliant and lucid account of the history of Western philosophy. It includes all the great minds and their ideas, from Plato to Hegel, Augustine to Nietzsche, Copernicus to Freud. You would think the book would be enormous and unwieldy, but it’s a concise 500 pages or so. Richard Tarnas describes profound philosophical concepts simply but without simplifying them. If you want an overview of the development of philosophy in the West, this is the book you need. It’s a great starting point and gives a real sense of how the ideas developed and influenced each other over the centuries. It ends with the close of the 20th century and post-modernism, and asks what’s next? How will we balance the pervasive (and perverse) dominance of masculine intellectualism? To answer that, Tarnas wrote Cosmos and Psyche – probably not the answer most would have expected.

In this groundbreaking book, Richard Tarnas demonstrates the correspondences between planetary alignments and the archetypal patterns found running through human history, both collectively and individually. Subtitled Intimations of a New World View, it offers a worldview and cosmology to heal the split in the Western psyche and is based on thirty years meticulous research. Mapping transits across time and cultures, this book explores the correlation between the human psyche and the movement of the planets, and delineates all the major archetypal alignments, comparing how they play out in different eras. You don’t need detailed astrological knowledge to follow the arguments, and it’s essential reading if you want to understand the movements of history, why humanity seems to repeat the same mistakes, and what we can learn from astrology.

This book is huge, in more ways than just its sheer length. As Jack Crittenden says, “The 21st century literally has three choices: Aristotle, Nietzsche, or Ken Wilber.” It’s a massive visionary tour de force of scholarship that traces the course of evolution from matter to life to mind, and describes the common patterns that evolution takes in all three domains. Wilber focuses on modernity and postmodernity, and asks what they mean and how they relate to different areas of our lives, such as gender issues, psychotherapy, ecological concerns, and various liberation movements. He also looks at how the modern and postmodern world can reengage with Spirit. This is where Ken Wilber sets out his ideas, the AQAL or four quadrant system, and how life works through all four areas. This is the book he’s been building on ever since, adding more complexity and subtlety. Essential reading for the Integral worldview.

>Discover more from Ken Wilber on these Bookshelves: Consciousness; Psychology; and Spirituality

The Outsider was an instant sensation, catapulting Colin Wilson to fame and launching his career as one of the most influential writers and thinkers of the 20th century. It explores the psychological dislocation characteristic of Western creative artists and forms a coherent theory of alienation, defining those afflicted as a type: The Outsider. Wilson deconstructs the psyche of the Outsider through the lives and works of Kafka, Camus, Hemingway, Hesse, Lawrence, Van Gogh, Shaw, Nietzsche, Nijinsky and Dostoevsky – and looks at the effect they had on society, and vice versa. Still just as relevant as when it was first published, if not more so, The Outsider is a brilliant study of the predicament of human nature.

Missed any good ones? Recommend a book in the comments section below…

Does this path have a heart?

How to Use WordPress – My Home