A selection of recommended books about Science for anyone on the path to awakening and self-knowledge. These are some of the books I’ve found particularly interesting or inspiring over the years. Longer reviews to come…

Fritjof Capra – The Tao of Physics 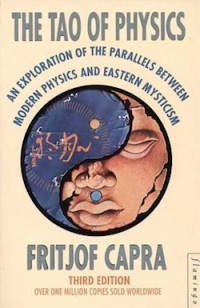 A classic exploration of the connections between Eastern mysticism and modern subatomic physics. Capra’s central thesis is that the mystical traditions of the East provide a coherent philosophical framework within which the most advanced Western theories of the physical world can be accommodated. When he discovered the parallels between the worldviews of physicists and mystics, he felt he was uncovering something obvious that would become common knowledge in the future. The ideas in this book were enthusiastically embraced and they spread into popular culture like wildfire. Scientists were more cautious, but that’s the way of science. Mysticism in the West is often seen as vague and unscientific, but thanks in part to this book, that is now changing. The growing interest in the new physics and mysticism is part of an evolutionary shift in consciousness which is seeking to redress the imbalances that have crept into Western culture. The Tao of Physics leads the way. 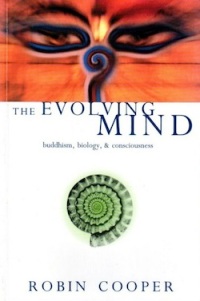 This book explores evolution from a Buddhist perspective. When humans emerged from the animal kingdom they had a new kind of consciousness. But evolution didn’t stop there. Human spiritual growth is the continuation of biological evolution. Robin Cooper shows that the next step doesn’t involve further biological development, but a radical transformation in consciousness. He builds upon an increasingly respected theory that consciousness directs the course of evolution, and traces the development of the mind from the primitive responses of simple organisms to the illuminated awareness of the greatest sages. He also explores evolution from a Buddhist perspective and shows that the traditional teachings of the Buddha offer a way of taking evolution into our own hands (or minds). This is a brilliant account of evolution which shows us how we can choose to evolve.

Taking turns in alternate chapters, Deepak and Leonard explore the key points in the debate between science and spirituality. Each section addresses a question, such as: Why is there something instead of nothing? What is our place in the universe? What is life? and Is God an Illusion? Science quite rightly challenged religion and pushed back its influence, but even as our scientific understanding grew, some of the greatest questions remain unanswered. This book continues the lively debate, setting out the ideas in a clear and sometimes provocative way. As a physicist, professor Leonard Mlodinow obviously reasons from the position of a scientist and shows what modern quantum physics tells us about our world. He believes matter can account for everything. Deepak Chopra believes there’s a deep intelligence underpinning the universe and that consciousness is central to our understanding. This is a challenging book but it will make you think, which is whole point.

Paul Davies – The Mind of God 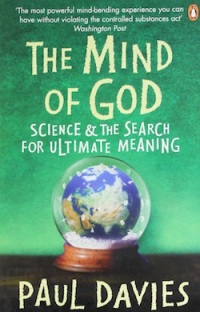 Many scientists believe that the laws of nature came into existence spontaneously, without the need of a creator. In this book, acclaimed physicist Paul Davies argues that these laws must have a special form because they’re described in mathematical terms. Our success in using mathematics to describe nature points to a deep and significant link between the human mind and the organisation of the physical world. Davies explores the origin and evolution of the cosmos, the possibility of other universes, and the claim that this universe is a kind of giant computer. In his quest for an ultimate explanation of existence, he concludes that the universe was no accident and it was structured in a way that provides a meaningful place for thinking beings. But he also suggests science has its limits. If we want to know why we’re here, we need to turn to mysticism.

During the past few decades, science has begun to prove what ancient myth and religion has always espoused: that there may be such a thing as a life force. Scientists all around the world have conducted experiments and produced extraordinary evidence to show that an energy field, also known as the Zero Point Field, connects everything in the universe. We are also part of this vast dynamic web of energy exchange. This book reads like a scientific detective story which reveals how the Field is responsible for many of the most profound human mysteries – from alternative medicine and spiritual healing to extra-sensory perception and the collective unconscious. This is fascinating and thought-provoking, and provides scientific proof of the paranormal. Read if you want the facts.

The science delusion is the belief that science already understands the nature of reality. The fundamental questions have been answered and only the details are left to be filled in as soon as we’ve figured it all out. Rupert Sheldrake demonstrates that science is being constricted by assumptions that have hardened into dogmas. The ‘scientific worldview’ has become a belief system which states that reality is material or physical, and the world is a machine made up of dead matter. Nature is seen as purposeless and consciousness is nothing but the activity of the brain. Free will is an illusion and God is just another idea we made up. Sheldrake brilliantly deconstructs all these dogmas and asks a series of questions that open up genuine scientific enquiry. This is essential reading, especially for reductionists and people caught in the mire of scientism.

This book is a conversation between science and religion which runs more smoothly than the one in Is God an Illusion? Rupert Sheldrake is a biologist and Matthew Fox is an Episcopal priest, and together they explore the nature of angels by comparing ancient texts with our modern scientific understanding. The texts they use as guides include the great Christian mystics and the Bible, including Dionysius the Areopagite, St Thomas Aquinas, and Hildegard of Bingen. This is a groundbreaking book which aims to restore dignity, meaning and joy to our ancient belief in heavenly beings. Sheldrake and Fox discover that angels are far greater and more powerful than we ever knew, and our belief in them can revolutionise our lives and have profound implications for the future. Inspiring and mind expanding.

Danah Zohar – The Quantum Self

This book demonstrates how developments in modern subatomic physics demand a radical new way of looking at our models of personality and ourselves. Danah Zohar explores the strange and contradictory world of quantum physics to show that a more participatory view of our relationship with the universe is essential if we want to discover our true nature. This new perspective replaces the alienation and fragmentation imposed by traditional mechanistic science and offers a more holistic approach. This is a thoughtful and inspiring book that doesn’t overstate its claims. While Stephen Hawking said if we discovered a complete theory of cosmology we would know the mind of God, Danah Zohar says if we truly understand our place in the universe, we might see ourselves as thoughts in the mind of God – a probabilistic ripple within a vast cosmic ocean. Highly recommended for its clarity.

Missed any good ones? Recommend a book in the comments section below…

God needs you to keep Him company…

Resources and Advice for Writers