Last time we looked at loneliness and the power of community and our need to reconnect with each other. One of the things that makes that more difficult is our relationship to time. It seems to move faster each year and we’re so focused on getting a million things done that we don’t have time for each other.

You squeeze a holiday into your schedule but when it arrives you can’t relax because you’re too busy thinking about all the things you need to do when you get back. The relentless drive into the future never ends. We’re all spinning our wheels and going nowhere fast.

When we lived in an agricultural society our sense of time was governed by the seasons, but with the rise of industrial society we moved away from natural cycles into clock time. The use of computers and the internet has shrunk time even further. Stock exchanges now trade faster than we can think – a million times faster.

Our days (and nights) are subdivided into thousands of increments which never seem to stop. The need for economic growth means we must accomplish more in less time each year. This pressure to do more with less makes us feel like we’re always rushing. The stress of hurrying impacts our health and happiness, and we feel disconnected from each other because we’re too busy to look up from the treadmill.

It also means we’re less likely to think about the future in any meaningful way. The demands of the present moment and our short-term goals mean we live in a blur of activity that takes us precisely nowhere. This kind of focus on the present isn’t the same as being in the eternal Now, but we’ll come to that in a moment…

There are five major problems with this short-term focus:

In the short-term it makes sense to grab what you can and enjoy yourself as much as possible. Life is short and booze is cheap. You can ignore the threat of a hangover until the morning. And your inability to pay off your credit cards isn’t a problem until the debt is called in.

Nobody knows what will happen in the future, but when you focus exclusively on what’s right in front of your face, you miss vital clues. Like the Titanic running into an iceberg despite the warnings, you suddenly find yourself overtaken by disaster. For example, we know the earth’s resources are limited, but we refuse to change to a more sustainable way of living.

Avoidance of the future means you end up living in a kind of time bubble. If you try to look beyond your immediate situation it can be disorienting or even disturbing. Your imagination doesn’t extend very far into the future, and when it does, you assume it’ll look like the present – but with robots. When you think about the consequences of our way of life, it makes you feel guilty, so you avoid thinking about it altogether.

We export problems to the future

The industrial economy operates on short timeframes designed to maximise profits and minimize costs. If something isn’t on the balance sheet, it doesn’t exist. So costs incurred later, such as safety and maintenance, are cut back regardless of the consequences. The nuclear industry provides a perfect example: we still have no idea how to deal with the toxic waste and yet we keep building nuclear plants. Dumping it into concrete tombs that are ‘safe’ for the next 100 years is not a solution anyone living 105 years from now will appreciate.

Narrow timescales diminish the meaning of our lives

Sometimes you’re so busy rushing around that you barely notice where you’re going. The future becomes abstracted and the only things you plan for are special occasions, like birthdays or holidays. Thinking ten years ahead seems a long way off. So much could happen in the meantime, what would be the point in planning anything? This keeps you at the surface of life and you never stop to consider why you live the way you do.

One thing is clear: if we keep going like this, we’ll hit the wall.

The earth has witnessed many mass extinctions already, and humans may be next if we don’t change our short-term thinking habit. We haven’t been around long and it would be a shame if we were to disappear now – just as we’re beginning to understand who we are.

Here’s a great drawing of the History of Earth to put us humans into context. Click the image to see it full size and read the cartoons – well worth a look!

If we don’t want to become another extinction statistic, we need to change our view of time. Short-term thinking removes us from the continuity of the past and the future. We have largely forgotten our ancestors and think nothing of the people who will come after us. But we are the ancestors of the future. What will people 200 years from now think of our legacy?

There are two ways to deal with this problem:

Re-inhabiting time puts you back in touch with the past and your ancestors. It connects you to an ecological view of yourself as a steward of the Earth. Embedding yourself into deep time returns the context of the history of life into your own personal life. It helps you to remember that what you do today has an impact that extends into the future.

This is especially important considering that some of our technology has consequences that extend far beyond one person’s lifetime, or even a couple of generations. If we survive the 21st century we’ll still be dealing with the fallout (literally) of these technologies.

“Take the thousand tons of depleted uranium weaponry used in Iraq and Afghanistan. The cancer-causing aerosol it leaves behind has a half-life of four and half billion years. That is as long as the age of the Earth.” – Active Hope

We need to slow down and touch the earth, and remember what it is that keeps us alive. There has been a huge rise in the number of people who suffer from allergies, some of them life-threatening. This is linked to a lack of the right kind of bacteria in our gut. We don’t go outside into nature and get our hands dirty anymore, and this has compromised our immune systems. A return to the earth and a reconnection with the land would improve our health as well as change our view of time. 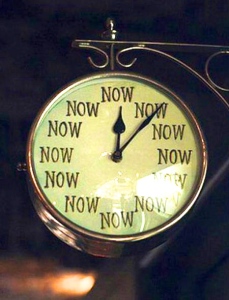 Reconnecting with the Earth reminds you that the natural world doesn’t run on clock time. Nothing actually runs on clock time. It’s an illusion, an artificial construct created in our own heads and a stick we use to beat ourselves with. The acceleration of time isn’t real, and neither are the profits we work so hard to accumulate. We’re killing the earth and ourselves for a fantasy.

The so-called present of our short-term focus is one that exists in time and so it keeps moving. To stay with it, you must keep moving too. Hence the mad rush. Stepping into the eternal Now takes you out of time and into peace. As Eckhart Tolle says in The Power of Now, it’s time to end the delusion of time:

“Time and mind are inseparable. Remove time from the mind and it stops – unless you choose to use it. To be identified with your mind is to be trapped in time… This creates an endless preoccupation with past and future and an unwillingness to honour and acknowledge the present moment and allow it to be. The compulsion arises because the past gives you an identity and the future holds the promise of salvation… Both are illusions.”

2 thoughts on “Active Hope and How to Travel in Time”