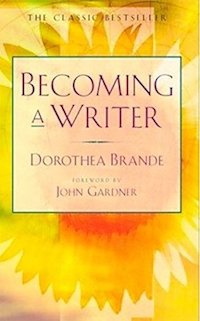 Becoming a Writer by Dorothea Brande is a classic in the field of self-help for writers. It was originally published in 1934 and has been much imitated since. It’s similar in intent to Writing Down the Bones and aims to get you writing by tapping into your inner genius. Sounds great, but is it worth reading?

I found this book hard going and not easy to read. The old-fashioned sentence construction sent me to sleep and there are far too many words. Brande never uses five words when she could use 20 instead. I also had problems with the general tone. It was like being browbeaten by a literary snob for hours. The book appears to be aimed at ‘proper’ writers, or what Brande defines as proper – i.e. literary writers:

“Your embryo journalist or hack writer seldom asks for help of any sort; he is off after agents and editors while his more serious brother-in-arms is suffering the torments of the damned because of his insufficiencies. Yet instruction in writing is oftenest aimed at the oblivious tradesman of fiction, and the troubles of the artist are dismissed or overlooked.”

The tone is described by others as witty, but I felt as if she was looking down her nose at me, admonishing me for daring to believe I could write. Brande claims the things that stop you from writing are character defects that need to be corrected. Now this may be the case, but putting it in those terms is hardly encouraging.

Her intention is to teach you how to be a writer. But that’s quite simple: all you have to do is write. And keep writing. If you write, then you’re a writer. It’s not hard; you just have to get on with it. The problems come when other things get in the way of your ability to do that.

One of the ways she says you can get into the habit of writing every day is to train yourself to write at a set time. You make an appointment with yourself, and then you have to keep it – you must write – no excuses. The idea is to get your unconscious used to writing on command. And then she says this:

“If you fail repeatedly at this exercise, give up writing. Your resistance is actually greater than your desire to write, and you may as well find some other outlet for your energy early as late.”

Great advice, thanks Dorothea! I would suggest an alternative approach: explore the nature of your resistance and find a way to overcome it. To give you an idea of the amount of waffle you have to wade through in this book, the following sentence summarises one entire chapter:

The practice of writing on command and morning pages will help you to find your voice as a writer, and train you to avoid the pitfalls of imitation.

Yes, this is probably where Julia Cameron got the idea for morning pages, although Brande doesn’t call it that. Much of the book is dedicated to exercises that help you harness the power of the unconscious: “to hitch your unconscious mind to your writing arm.” But she’s thin on specifics.

She also encourages you to look at your life regularly to decide whether your routines are supportive of your writing. This is a good idea and you can figure out what works and make changes as necessary. But she discourages too much introspection – I’m not sure why. Perhaps she was an extrovert and didn’t trust it. Or perhaps she thought it was an unhealthy habit not to be encouraged in sensitive young artists.

“Most writers flourish greatly on a simple, healthy routine with occasional time off for gaiety.”

In general, the advice in this book is sound, but you can safely ignore the stuff about typewriters and what kind of paper to use. I would also suggest ignoring the bad advice she gives on holing your mind still. These days we’re lucky to be flooded with advice on mindfulness and meditation so you can easily find something more helpful elsewhere.

Becoming a Writer may have been a breakthrough for writers back in the 30s and 40s, but there are many, many books like this now and most of them will be more relevant and probably more helpful than this one. But if you enjoy being lectured by a pompous literary wit, this is the book for you!

However, I wouldn’t recommend it to a young writer just starting out – I doubt they’d have the patience to wade through the interminable waffle. There’s very little of use in this book and most of it seems like common sense to me. You’re better off reading Fearless Creating by Eric Maisel, or dare I say it, my own book: Free Your Pen: Mind Training for Writers.

Read an extract from Becoming a Writer: The Writer’s Recreation