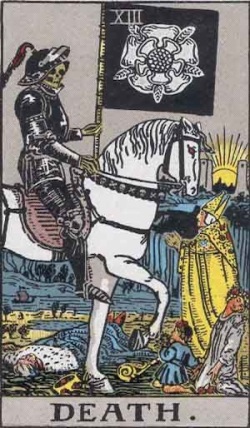 The next step on our journey to awakening is Death. A skeleton rides a white horse through a field filled with bodies. He carries a flag with a white rose. In the background flows a river and on the horizon stand two pillars framing the sun, but is it rising or setting? This is card number 13 which symbolises death and is often seen as bad luck. It is made up of 1 and 3 which reduces to 4, the symbol of order and organisation. Although Death seems to bring chaos, it is only bringing the new order which naturally follows life.

The sacrifice of the Hanged Man has been successful and his old self is dead. The hero’s perspective has shifted from being self-centred to being self-transcendent. He now enters a period of purification and transformation where he learns that everything dies, but nothing can grow without death.

“The purpose of the descent as universally exemplified in the myth of the hero is to show that only in the region of danger (watery abyss, cavern, forest, island, castle, etc.) can one find the ‘treasure hard to attain’ (jewel, virgin, life-potion, victory over death).” – C.G. Jung

The death of the old self must happen so that the hero can mature enough to become his higher self. Death brings the opportunity for rebirth. The figure on the card isn’t grim, but a liberator. The white rose on his flag symbolises the soul of the hero – the one he was carrying at the start of the journey on The Fool. Death may have come for the ego but the soul is still alive and will now draw its energy direct from spirit. The bodies on the ground seem to be coming back to life – the child and the young woman represent the seeds of new life.

The death of the ego frees consciousness from its old attachments. It is not the end but a transformation into a new form. If the hero wants to progress on the journey, the old forms must be cleared away to make way for the new life to come. Nothing is ever lost or wasted, as shown by the skeleton of Death himself. The skeleton represents the underlying continuity of life, the bones remain even as the body decays. All this apparent destruction is a blessing in disguise and the rebirth is on its way.

Next step on the journey to awakening: Temperance

>Catch up with the rest of the series here

Classic Spoilers: from Tolstoy and Hemingway