Winning the Euroscript Competition was the easy part. Next came a string of rewrites and learning how to deal with an intensive development process which made me feel challenged, elated, baffled, and conflicted by turns.

The first script report from Fenella Greenfield arrived in August 2008 and was a shattering experience. It consisted of a shortish report plus an annotated script with Fenella’s notes scribbled in the margins and across pages. I had a curious reaction to seeing huge lines drawn through whole sections of the script. It was as if she had planted a series of incendiary devices at strategic points and then detonated them. At first I was devastated and thought I had to start over, but when the smoke and flames cleared I could see what remained. She had ripped out everything that was unnecessary and left the good stuff intact.

It’s a bit like when you’ve broken a leg or your nose and it hasn’t set right, so they have to break it again in order to fix it. Ouch!

It also made me realise how cavalier I had been towards the feedback I’d received in the past. It was too easy to walk away from it and think, “Well, that’s just your opinion.” Now I was locked into a feedback loop. My back was against the wall and I couldn’t escape. I had to address the failures in the script. I had to take my writing seriously and I didn’t know if I was up to the job.

It became clear that, in places, I had focused too much on plot and not enough on character development. Although the main characters of Calum and Anya were fascinating, they tended to veer ‘off-character’ at times. The story worked best when the two damaged individuals at the heart of the story were forced together even as they tried to keep apart from each other emotionally. This was highlighted by the way they struggled to communicate – Calum is taciturn and insular, while Anya’s English is minimal.

“All brilliant films have, at their heart, a powerful relationship which develops during the course of the story… You have the kernel of this in your story, but you need to spin it out more and trust what you have.” – Fenella.

There was also some restructuring work to be done. In this draft I had a scene early in act 2 with Katerina (Anya’s sister), which showed her situation in the Edinburgh brothel. Fenella put a line through it, saying “we need to use the forest sequences for emotional development and change and engagement.” The Katerina scene took us away from the action with the main characters. So I cut it and changed the shape of the story so we don’t meet up with Katerina until Anya does in act 3. This meant that, emotionally, we stay with Calum and Anya on their journey, and it also gave the reunion between the sisters more impact when it finally happened.

My main task for this draft was to focus on Calum and his relationship with Anya, and to think of the through-line of the story not as plot but as an emotional journey. The plot is just a device to take the character on this internal ride. I had to think about what the character’s goals were and:

“be careful of what people are feeling and why at any given moment.”

One moment in the script stands out: it’s at the midpoint – Calum and Anya have just escaped into the hills where Tam Eden (the bad guy) can’t follow them, a storm rolls in over the forbidding landscape and Anya goes into labour. Calum has to deliver Anya’s baby sheltering from lashing rain and gale force winds under a flimsy tarpaulin. I cut the scene just as the baby’s head appeared, jumping to the next sequence. This is what Fenella wrote in the margin:

“You need to connect PLOT with an emotional development BEAT – don’t cut at the point just before he’s LEARNING something. We need to see how this powerful event is affecting him emotionally and changing him as a human being.”

Many of the notes in the script were questions regarding clarity – pointing out description or dialogue that wasn’t clear enough, or just plain confusing. I needed to do a lot of work to clarify the subplots with the Eden brothers, make their relationship clearer and show how their criminal business operation worked.

“A script is the tip of an iceberg; we see 10% but we need to know that underpinning it is 90% of worked-out facts.”

Believability was a problem here too, and Fenella asked me to make the bad guys “less evil with a capital E.” On top of this I was still making it too easy for my protagonist and antagonist to get what they wanted. There were too many unlikely coincidences so I had to work harder to make my characters work harder to find things or achieve their goals.

Here’s an example from act 1 where Tam arrives at Calum’s shack in search of Anya. You’ll notice at this point Tam was called Tim – I changed his name in a later draft; ‘Tim’ felt like the wrong name for such a nasty character. In this first extract Calum is way too cooperative: 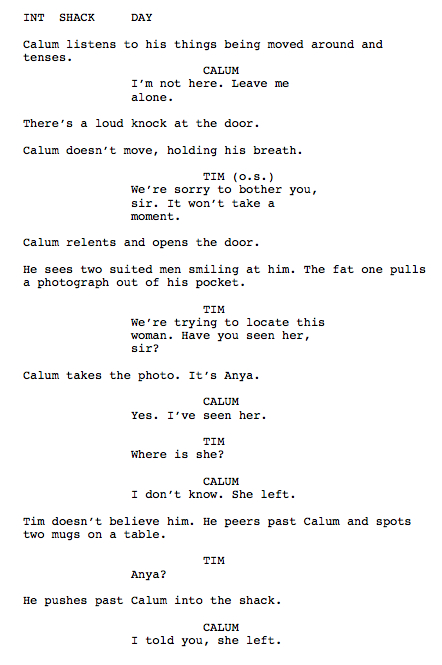 This is the rewritten scene – Tam (Tim) has to work harder to get Calum to open the door, and Calum refuses to even admit that he’s seen Anya: 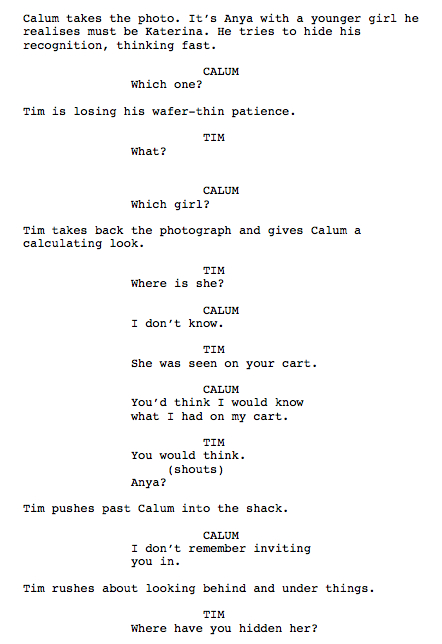 I completed the rewrite by the end of September 2008, and hunkered down to wait for the next script report, which we’ll look at in part 3.

God needs you to keep Him company…

Resources and Advice for Writers