The Euroscript development process was going well and the second report from Fenella Greenfield arrived in November 2008. This was when things started to get tricky.

Many of the problems of the previous draft had been addressed. Calum’s character arc was now clearer, well written and more intriguing; the central relationship between the two main characters was working better; and the dialogue was improved.

My task now was mostly about clarifying emotional details and backstory for all the characters, and adding some depth into the characterisation. The bad guy subplots in particular needed more work – I was really struggling with it. I just don’t know many drug dealing pimps, thank goodness, and I was desperately trying to avoid the obvious and clichéd. The end result was a confusing, underwritten mess.

Fenella also felt I should make the script read more poetic, especially in the woodland scenes. The script jumps back and forth between the harsh, urban reality of the bad guys and the countryside, and Fenella described the tone of the film as otherworldly and surreal. This got me thinking, as I didn’t really see it that way. I felt I was being realistic throughout.

The modern world and the myth of progress has alienated individuals from their natural selves and their roots, casting them out of Eden into an industrialised wasteland. Calum lives closer to nature than most, but he’s isolated and cut off from his emotional life. Perhaps our tendency to see the natural world as surreal, poetic and ‘other’ is a result of our alienation from it. This also leads to a sentimentalisation of nature and the wild.

It’s the urbanites who are truly surreal and otherworldly, disconnected as they are from nature and surrounded by concrete. The natural world is the real world. ‘Civilisation’ (in its current form) is unreal and distorted, a dehumanising and destructive influence, where life is sold to the highest bidder or the lowest common denominator.

This is what the Eden brothers and their nefarious organisation represent in the story. My upholders of society and civilisation are criminals, and my hero is a recluse who lives alone in the woods, in desperate need of love but terrified of it at the same time.

Whatever our feelings about the natural world, I couldn’t see that it would hurt to up the poetry a tad in the sequences with Calum and Anya as they slowly danced towards each other, finding love in a violent universe.

Back to the script.

The tricky part was that I had more or less nailed the structure of the story by this point. Now came the process of improving the writing itself. Rather than making big, sweeping changes, which are relatively easy – just hit delete – you have to tweak and cajole. It’s incredible how taking out one word, or changing one verb can completely alter how a scene reads. You can make a tiny change to one scene and then discover it so alters the trajectory of the story that you need to rewrite whole sections.

I needed to look at individual sequences and scenes and find ways to up the drama. I was still underwriting some of the dramatic sequences, so this draft was about milking it and getting as much conflict out of every situation as possible. The general rule of storytelling (especially in film where screen action is king) is that a character wants something, they go after it and something or someone stops them from getting it. Characters grow through meeting obstacles. Of course, it’s also important to remember you can’t have everything going wrong all the time – you’ve got to get lucky occasionally. But in a script you must be very careful how that luck falls.

There were two sequences in particular that I needed to address. First, Anya’s escape from her captors in act 1 was a bit underwhelming – she simply slipped away while backs were turned outside the brothel in Newcastle. Not very dramatic. Fenella suggested that Anya should escape from the doctor who was about to perform a caesarean. This would be more dramatic and would also make it very clear exactly why she was running away. The rewritten scenes worked so well I was slightly annoyed with myself that I hadn’t thought of doing it that way to begin with.

The other sequence was Tam’s search for Anya which stretches over most of act 2. The whole thing needed to be plotted more carefully so it became harder and less repetitive. Tam needed to stalk Anya through the countryside.

Here I hit a huge stumbling block: how do you write a chase sequence where a man in a BMW is chasing a horse and cart? How do you keep them apart and yet maintain suspense and momentum? Even with Calum driving the horse and cart down labyrinthine bridlepaths, I struggled to get this right. It begins when Tam arrives at Calum’s shack and searches for Anya. In his haste, he runs into the stable and upsets the horse who rears up and breaks Tam’s wrist. This slows him down at the start by forcing him to get a cast fitted. He then sets off in pursuit. Here’s an early part of act 2 from the rewritten script. Can you spot the bit where Tam goes ‘off character’? 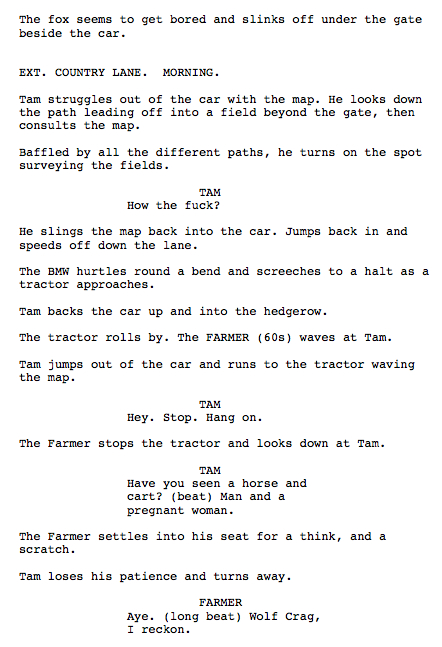 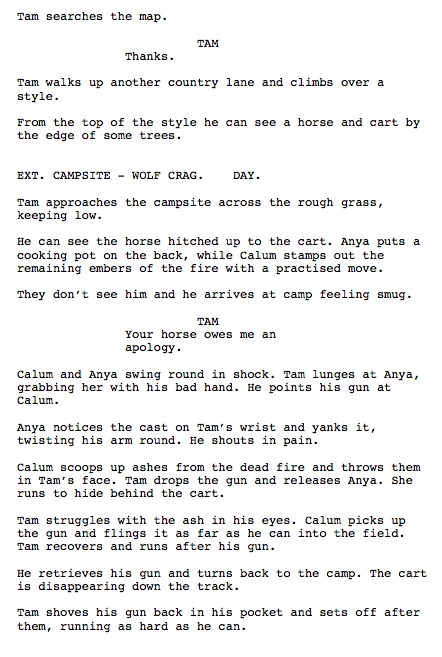 The ‘off character’ bit is where Tam thanks the farmer – there’s no way he would be so polite! I changed that in a later draft, and cut the confrontation with Calum and Anya completely. It was too soon in the story for that level of action. The confrontation now happens at the end of act 2. Here’s the same scenes above from the final draft, starting with Tam talking to the farmer: 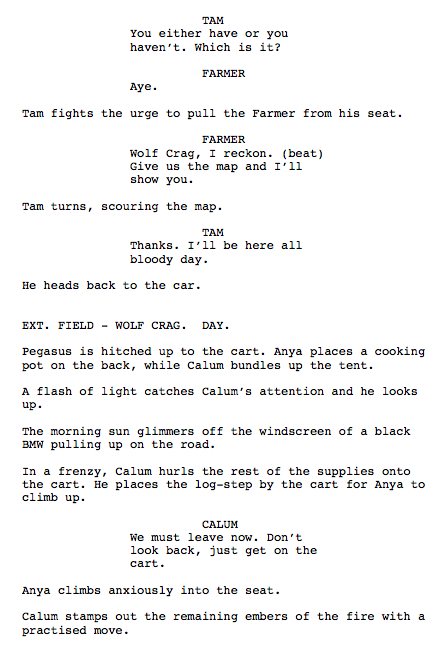 I finished the rewrite in January 2009 aware I was nearing the end of my development process with Euroscript. The next report would be crucial, and we’ll look at that in part 4.