The Euroscript development process was coming to an end and I received my final report from Fenella Greenfield in March 2009. So far in this series I’ve been focusing on the problems I had with the screenplay, but it’s important to mention the positive feedback too.

Alongside the notes written into the script were brief comments on what worked. It was extremely gratifying to see a line marking out a scene and “very nice” written beside it. Lines of dialogue and well handled moments in character development were also highlighted. It gave me something to aim for, showed me what worked, and made it clear that, whatever problems there may be in other parts of the script, I was perfectly capable of writing something good. 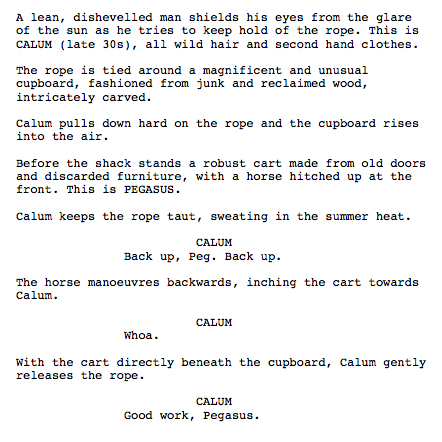 The final report continued along the same lines as before. Everything was now working better: the dialogue was good, Calum and Anya’s relationship was pretty much all there, and the Eden brothers’ backstory was clearer. So for the final rewrite under Fenella’s guidance I focused on making Calum’s character arc, his emotions and motivations as clear as possible. The emotional underscoring needed to be spelt out:

The end of act 2, in particular, needed work. This is the moment when Calum loses everything. The bad guys have caught up with him and recaptured Anya. Tam knocks Calum to the ground and stalks off with the baby. The way I had written it, Calum comes to and watches Tam and his minions leave with Anya and the baby. He then stealthily gives chase, ambushes the men and snatches the baby, running off with it into the woods.

This didn’t really work emotionally. It needed to be harder and more dramatic. We needed to see Calum working out what to do next. When he comes to he needs to be completely alone, Anya and the baby are gone. That way we really understand he has lost everything and has to make a decision. Does he just give up and go home? Or does he go after them and fight to get Anya and the baby back? Of course he decides to go after them, but it all needed to be spelled out clearly.

“Don’t rush. Use these sequences to reveal his emotional state and where he is along his arc.”

“Never underestimate how heavy handed you have to be when showing emotion in a script.”

Screenplays are written in a different way to novels, aside from always being in the present tense. A script uses less words and never goes inside a character’s head. Everything has to be shown clearly as action. If it’s not in the script, it won’t end up on the screen. This is why you have to make the emotion so clear, sometimes to the point where the writing makes you cringe because it’s too obvious. It’s a hard balance to strike and I’m still not sure I managed to get it right. Here’s a scene towards the end of act 2 where Calum finally opens up and talks about his dead wife: 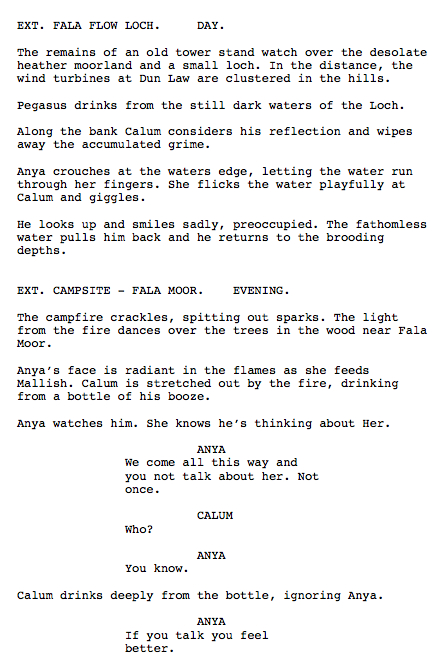 Over the following months I rewrote This Other Eden twice more, receiving further feedback from Northern Film & Media’s Project Development Service (now defunct). Then I submitted the script to the UK Film Council’s First Feature Development Fund (also defunct). It wasn’t successful, but I did receive another script report from their feedback service run through The Script Connection. I got it just before Christmas in 2009 and it was the best present I could have hoped for.

It was a very positive report. They said This Other Eden was impressive, well conceived and well developed. The structure of the script was ‘textbook’. The premise was engaging and the relationship between the two main characters was compelling and heartfelt.

However, because the story is a drama-led thriller it isn’t obviously commercial so would require ‘names’ to get it financed. They suggested it might play well to an ‘educated genre audience’ and gave the very welcome advice to avoid making changes to my vision in order to get the film made: “stick to your guns and, instead of making the script more commercial, try to attract a commercially meaningful cast or a director to get this made.”

So, what have I done since then?

The only way to get a screenplay financed is through an agent and to get an agent you need a pretty impressive portfolio of work. So once I was happy with This Other Eden, I began work on another script. Early in 2010 I completed the first draft of a low budget psychological thriller called Bluebird which needs extensive rewriting. And then I began work on my first novel, Addled.

I enjoyed the process of developing the script and it was fascinating to see how many changes a story could go through without losing the essential focus at the core. There are countless ways to tell the same story and the rewriting process could go on indefinitely. Despite learning a lot, I felt I’d lost something too. The story evolved in a direction I hadn’t really wanted to pursue. I didn’t wanted to write about gangsters and drug dealers and pimps, but felt compelled to do so due to early feedback I received on the script. Perhaps the feeling was that it would make the story more dramatic or ‘commercial.’

Looking back at the process now (in 2015), I can see that I was too easily swayed by others’ opinions and didn’t have the confidence in my own writing or ideas to fight my corner. In the end I decided to concentrate on writing prose fiction rather than screenplays. It gives me more control and I can get the work out to readers more easily. Despite my reservations, winning the Euroscript competition was one of the best developments in my writing ‘career’ to date. I’ve no doubt it improved my writing and my confidence. I saw it as an opportunity to find out if I had what it took to be a writer, and to my slight surprise and utter delight, I found that I did.

The basic principles of storytelling apply to all forms of the craft, so I can feed everything I learned from screenwriting into my novels. And I haven’t given up on This Other Eden. I enjoyed writing about Calum and Anya and can still feel them bubbling away inside me, searching for another story. Perhaps I’ll revisit the tale and rework it into a novel.