My muse is a shapeshifter. She’s indiscriminate: a divine whore and angelic trickster up to her knees in mulch and butterfly cocoons. She’s in sunshine and dogs and fleeting thoughts and pain. She isn’t something other than me, but I can’t control her. She is my daemon, my guide.

She would also like me to tell you that I don’t understand her and have no idea what I’m talking about.

My muse is a treacherous bitch. She led me away from my dream job into a direct confrontation with my own darkness. Sometimes I think she wants to kill me, but she just wants me to be all that I can be. She knew – even if I didn’t – that life as a studio engineer would never be enough, that I would crave more creative input, that my voice would go unheard if I stayed.

As silent as a Muse

The idea of the muse comes from Greek mythology. Zeus and Mnemosyne, the goddess of memory, had nine daughters who embodied various arts and systems of knowledge. This is a mythological theme that goes back long before the Greeks. The idea that the arts of civilisation were given to humanity by the gods is found in the myths of all of the earliest cultures, like Egypt and Sumer. It’s probably where the Greeks got the idea – they nicked everything from the Egyptians.

In those days, people believed that creative thought was inspired by the gods. All you had to do was make yourself available, and turn yourself into a lightning rod to capture whatever it was the muses wanted to deliver. And of course, it was mostly men doing the capturing, which probably fed the erroneous belief that women were not creative. Women were fit to be vessels of creative inspiration only if it manifested itself through a man. This from Robert Graves:

“She is either Muse or she is nothing. This is not to say that a woman should refrain from writing poems; only, that she should write as a woman, not as an honorary man…It is the imitation of male poetry that causes the false ring in the work of almost all women poets. A woman who concerns herself with poetry should, I believe, either be a silent Muse and inspire the poets by her womanly presence…or the Muse in a complete sense…impartial, loving, severe, wise.”

Whatever else she is, a woman must never be autonomous. She must never have her own mind or speak with her own voice. The muse is silent – seen but not heard. Even Jung, that great champion of women, agreed, saying that a woman who worked and studied like a man was “doing something not wholly in accord with, if not directly injurious to, her feminine nature.”

Things have obviously improved a lot since then, but women are still struggling with outmoded ideas. As I mentioned last week, women are so often seen as the muse and put into the passive role of ‘being there’ for the male gaze, that it effectively silences them when it comes to producing their own creative work. As a women you have to fight your way out of a maze built by men, simply in order to think for yourself.

Women had less freedom to be creative in the past, but it’s difficult to get a clear sense of what was going on, historically speaking, because everything a woman said or did was within the context of repression. The stories you internalise about who you believe you’re supposed to be in relation to others, distort your perception of everything else. The psychological models were mostly developed by men who, with the best will in the world, have no idea what it’s like to be a woman. Even now, while women deconstruct the myths and constructs of the past, our thinking is coloured by that past and exists in reaction to it. Consciously or unconsciously, the past still exerts a powerful undertow.

I don’t know how I’m ‘supposed’ to feel ‘as a woman.’ I’m not even sure what a woman is. Or a man. Or a human being. All I know is how I feel and what I think. Whether that is normal or not is probably impossible to answer, but this applies to men too. It applies to everyone. There’s no such thing as ‘normal.’ People aren’t concepts. Nobody looks exactly like a psychological model on the inside, and trying to make yourself fit a pattern imposed on you from the outside is an act of violence.

“I do not wish women to have power over men; but over themselves.” – Mary Wollstonecraft 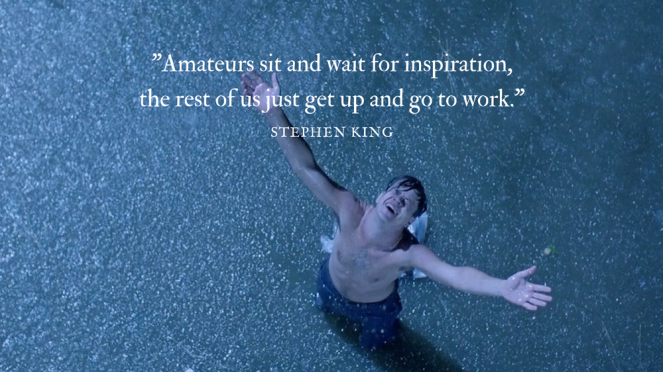 What is the Muse anyway?

Although the muse is seen as feminine, it doesn’t have to be. Stephen King sees his muse as a “hard-headed guy” who lives in the basement smoking cigars. Writing is just another job, like plumbing or driving trucks, he says, and you have to work at it. The muse isn’t going to make life easier for you – that’s not what a muse is for:

“There is a muse, but he’s not going to come fluttering down into your writing room and scatter creative fairy-dust all over your typewriter or computer. He lives in the ground. He’s a basement kind of guy. You have to descend to his level, and once you get down there you have to furnish an apartment for him to live in. You have to do all the grunt labor, in other words, while the muse sits and smokes cigars and admires his bowling trophies and pretends to ignore you. Do you think it’s fair? I think it’s fair. He may not be much to look at, that muse-guy, and he may not be much of a conversationalist, but he’s got inspiration. It’s right that you should do all the work and burn all the midnight oil, because the guy with the cigar and the little wings has got a bag of magic. There’s stuff in there that can change your life. Believe me, I know.”

I can’t pin my muse down to a particular image; she’s too protean and slippery. She’s probably not even a she.

The muse is a personification of inspiration or the creative life force. It has nothing to do with gender, and neither does creativity. Everybody is creative. Gender is irrelevant – we really need to get past this hang-up we have with genitals! Gender isn’t even binary, and like most things in life, exists on a spectrum. Whatever your gender, everyone has access to the masculine and feminine energies within them, and you need both in order to create anything.

However, the creative life force is feminine because it’s constantly changing and flowing and becoming something else. But in that raw, inchoate state it’s impossible to hold or give it shape. It must be brought down to earth, or dug up, if you prefer, and poured into a structure. That’s where the masculine side comes in. The feminine and masculine need to work side by side – as best mates – not one dominating the other.

There’s more to be said about the interplay between the masculine and feminine archetypes, but I’ll leave that for another post. But in simple terms, women got saddled with the muse gig because they look female on the outside. Men projected their inner feminine energies onto women as part of their shadow complex, and then set about trying to possess and control them. The history of civilisation is the sad consequence.

Personally, I wouldn’t make a good muse. Although I’m often silent, when I do open my mouth, it’s too full of questions and ideas and my own mind to be a blank canvas for somebody else to scribble their musings on. Plus I tend to react badly to being dominated or possessed – call me touchy.

Ultimately, the muse isn’t about creating art – it’s about creating life. Inspiration comes from intimacy with the world, from an openness to being transformed. A sudden inspiration can send you hurtling down an unexplored path that turns your life inside out. It doesn’t have to involve making a song or a painting or a story. It’s about you becoming you. Art is just another way to explore what it means to be you in this moment.

“Some say the creative life is in ideas, some say it is in doing. It seems in most instances to be in simple being. … It is the love of something, having so much love for something – whether a person, a word, an image, an idea, the land, or humanity – that all that can be done with the overflow is to create. It is not a matter of wanting to, not a singular act of will; one solely must.”

The muse is the part of me that knows what I need before I do. She led me away from my dream because she could see what was coming.

It broke my heart to leave the recording studio. My dream was shat upon from a great height by circumstances beyond my control and the mysterious workings of my own soul. Watching my dream die was the first in a long series of losses and compromises that eventually led to an awakening.

I ended up recording a talking newspaper for the local council – not exactly rock and roll. For ten years, I squeezed behind the mixing desk beside a soundproof booth in a tiny room off the main office, and went slowly mad with boredom. It felt worthwhile – providing information for blind and partially sighted people – but the routine was deadening. 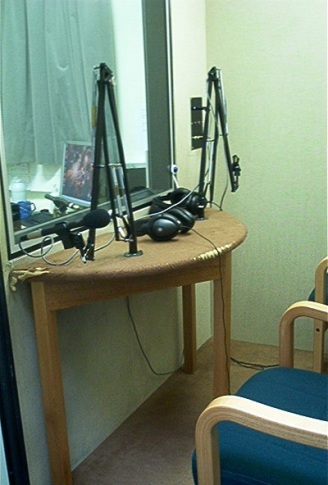 Almost three years into the job I was desperate for a change. My snoozing muse awoke and ordered me to write. I had never done such a crazy thing – why would I? But she was adamant. She stood over me with a big stick and refused to shut up until I embraced my new path.

But the ground beneath my feet is never secure. The local council job crumbled into dust leaving me with stories and little else. My muse assures me that all will be well if I dive into the river and learn to float. But it feels like I’m building a life out of nothing but air – words strung out over an abyss, forever shifting in a vast hall of mirrors. I don’t know what I’m doing.

Jack London said: “You can’t wait for inspiration. You have to go after it with a club.”

For me it’s the other way around – she comes after me with a club. All I can do is focus on the next thing in front of me, the next step, the next breath…

Life keeps on moving. I’m just trying to keep up.

2 thoughts on “Musings on the Muse”