Our story continues: the deal has been made and the maiden has lost her hands…

The devil retreated to the forest and the maiden’s parents did their best to care for their daughter. Her father begged her to stay, promising to provide everything she could ever want or need, but she refused. She had her bloody stumps cleaned and bound in fresh white gauze, and then set out towards the forest.

The maiden wandered this way and that, not knowing where she was going. She walked all day and stopped at nightfall. She had arrived at a royal garden, and in the moonlight could see trees covered with fruit. She was so hungry she could barely stand, but she couldn’t enter the garden because it was surrounded by a moat.

She fell to her knees, famished. Suddenly an angel appeared, a beautiful spirit in white, who made a dam in the water. After a short while, the moat dried up and the maiden was able to walk across and enter the garden. There she saw lines of trees heavy with ripe pears, but she couldn’t reach them with her stumps.

One of the trees, perceiving her need, bent a branch towards the maiden. And so, using only her mouth, she was able to eat a pear, the juice running down her chin. The angel stood watch as the maiden ate.

Across the garden, hiding behind a tree, stood the gardener. He also watched the maiden and the spirit by her side, but he didn’t interfere. He knew magic when he saw it and let the maiden be. Finally, after eating just one pear, the maiden retreated across the drained moat and disappeared into the forest… 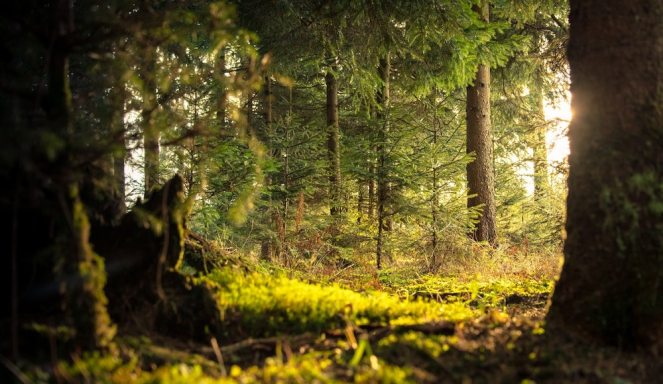 Welcome to the Underworld

After the terrible ordeal of dismemberment, the maiden no longer has hands. She can’t take care of herself, and is probably traumatised, so it’s natural that her parents want to help. With their newfound wealth, they offer to keep her in the manner to which she has become accustomed. The mother and father want to keep the maiden unconscious.

Naturally, the maiden chooses to leave. To stay would be a living death. Her every need may be taken care of and she would be relatively safe, but there would be no real life, nothing new. It’s tempting to stay and be seduced into having an easy life, but in the end, she must find her own way.

At this point in the journey you’re beginning to move away from being unconscious. You want answers. The deeper wisdom of the psyche knows you need to wake up and to do that, you must wander – not out into the world, but inward. This is a journey into the depths of the unconscious, but you must travel deliberately and consciously.

You must follow the dictates of your own soul, not what the world would have you do or be. You can’t allow others to dictate who you should be or how you should feel. You must find your own way through the forest.

“The handless maiden listens to her innermost wisdom, goes to the woods, and is quiet. There is immediate relief in this since it is less lonely to be alone than to be in false relationships. She is hungry, scratched by the briars, helpless without hands to serve herself. But she is at home in her feminine world of the forest. Here is the native power of inner femininity.” – Robert A Johnson

To heal you must wander without knowing where you’re going or what you’re doing, which can make you feel very vulnerable. You don’t know what will happen and you have to trust that, somehow, you’ll figure things out. If you try to hold on to anything, it slips through your fingers. Grasping and clinging no longer work and are counterproductive.

You’re moving away from the ego part of the psyche, represented by the mother and father – now amputated. The collective culture no longer has any hold on you and you know you can’t find your answers there. In a sense, you become homeless, a wanderer, an outsider. This is true even if you’re in relationships and still active in the world, doing your job and paying your bills. But you feel separate from the world, which carries on around you. This can make things awkward as you try to balance your need to withdraw inwards, with your responsibilities in the outer world.

You may feel alienated for a time, cut off from society, and yet, at the same time, you know society can’t help you. Society – unconscious society – is what cut off your hands; unthinking, mindless, and oblivious to the soul. You know there’s no going back.

One of the things that can help during this uncertain time, is to recognise the nature of the journey that you’re on. When everything recedes and all your plans disintegrate, it’s easy to believe that things will never get better. You descend into the underworld and begin to wonder if you’ll ever find your way back out again. But the clues are there in the story.

In Women Who Run With the Wolves, Clarissa Pinkola Estes explains that myths of descent used to be seen in a more positive way. She compares the differences between the myth of Persephone, who was grabbed and carried off by Hades against her will, and older myths, such as the descent of Inanna which was voluntary. The later myths were rewritten to emphasise the dominance of the masculine. But the older stories portrayed the descent of the maiden as yearning for wisdom and union with the Beloved:

“In these old religious versions, the maiden need not be seized and dragged into the underworld by some dark God. The maiden knows she must go, knows it is part of divine rite. Although she may be fearful, she wants to go meet her king, her bridegroom in the underworld, from the beginning. Making her descent in her own way, she is transformed there, learns deep knowing there, and ascends again to the outer world.”

Restoring these old stories would do everybody a lot of good, not just women. The entire process is driven by a deep instinctual wisdom that we’ve lost touch with. In a sense, we’re all handless maidens until we make this journey into the underworld to reunite the opposites of the Self. 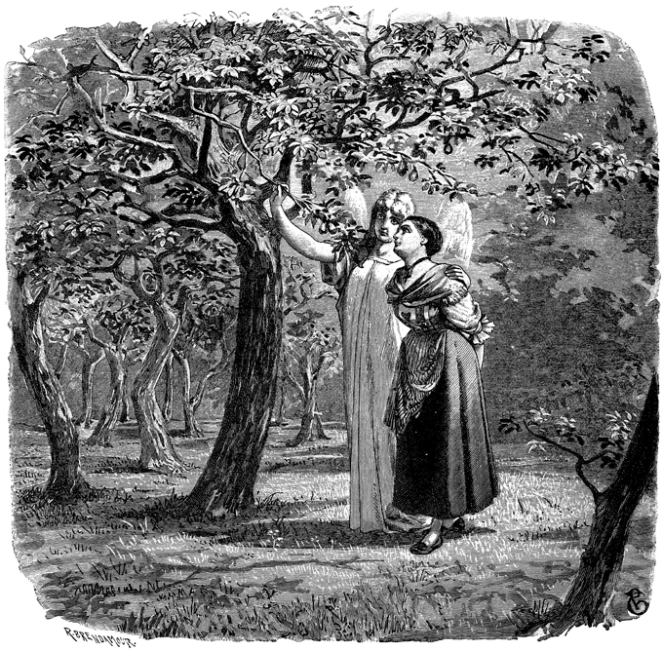 The maiden finally arrives at the king’s orchard in the underworld, surrounded by a circular moat. This is another boundary between worlds, similar to the circle the maiden stood within to protect her from the devil (see part 2). When she crosses the moat, she’s crossing into another level of reality – another state of being. But she can’t get across without help.

The moat represents the Styx, the river that separates the land of the living from the land of the dead. When you descend into the underworld as a living person you have to be careful not to touch this river or you’ll be sucked into a lower part of the unconscious and may never make it back out. You’ll be pulled into unconsciousness and death.

This part of a dark night of the soul is tricky because you can get confused and believe you’re actually dying, or that you need to die in order to overcome what you’re going through. But that’s not the case. The angel turns up to help because you’re meant to pass through the land of the dead as a living person – this is a living resurrection. As Estes reminds us, there’s a big difference between death with a small d and Death with a capital D.

What you’re aiming for here is rebirth so it’s important to not get complacent or give in to feelings of lethargy or ennui. Despair can pull you under before you even realise what has happened. So don’t be too quick to give up on yourself – there’s plenty of help to hand, even if you don’t have hands of your own.

In any journey through the unconscious, it’s necessary to have a guide who knows the way. The unconscious is full of strange and confusing images. The path is rarely clear and it’s easy to get sidetracked by illusions and self-deceptions, as described in the Moon tarot card. The maiden is guided by an angel, or spirit in white, who dams the water of the Styx and allows her to pass freely into the garden.

The angel represents the higher Self, the part of the psyche that’s connected to the divine. This is the spark of Sophia, the deep knowing of the Wild Mother who wants you to awaken and come home to yourself. She’s with you every step of the way, even in darkness.

The angel accompanies the maiden across the drained moat and into the garden which is filled with pear trees. The garden represents the centre of your being, an enclosed sacred space. In a garden, nature is tamed, tended and cared for, so it also represents consciousness, as opposed to the forest which stands for the unconscious. 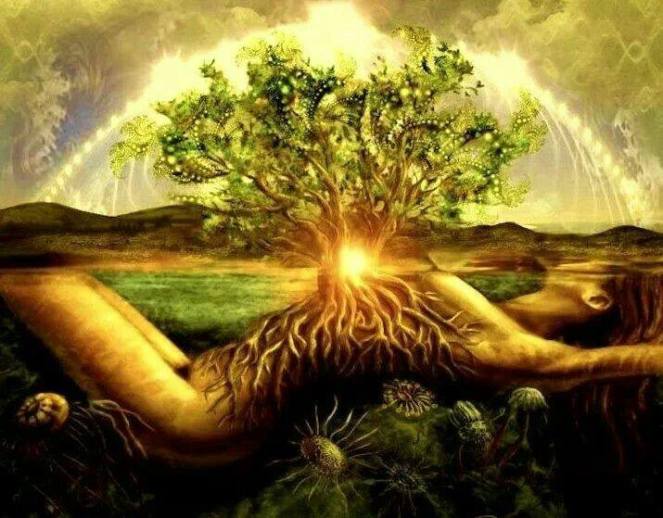 At this point in the journey, the unconscious goes out of its way to help you – Angels! Pears! – it wants you to be fed and nourished. The water of life flows towards you when you need it, coming direct from the depths of the Self.

“The tale resurrects the memory of a very old promise; the promise is that the descent will nourish even though it is dark, even though one feels one has lost one’s way. Even in the midst of not knowing, not seeing, ‘wandering blind,’ there is a ‘Something,’ and inordinately present ‘Someone’ who keeps pace. We go left, it goes left. We go right, it follows close behind, bearing us up, making a way for us.” – Clarissa Pinkola Estes

During a dark night of the soul you can’t be nourished by anything in the outer world. Your old self is gone. The world no longer holds your interest, old goals fall away, priorities change. Things that once nourished you, no longer satisfy. You must turn inwards to heal and find nourishment, and when you do, the inner world turns towards you and offer its help. You’ll be nourished by your deep feminine wisdom, the soul.

An excellent way to enter the garden of your being is to spend more time in nature. It can be profoundly healing to just be and feel the wind on your skin, listen to the birds singing, and watch life doing its thing. Nobody is in a rush; the birds and animals aren’t trying to prove anything or force life to go the way they want. In nature, and in the deepest part of your own being, things simply are. Here you can let go and simply be.

Next time, we’ll find out how the king feels about someone pinching his pears…

Thanks for reading! To support my work, donate below 🍵. Thanks in advance! 🙏❤️