In which Pooh teaches us how to listen to our intuition and not the rabbiting of our egos: On a foggy day, Pooh, Piglet and Rabbit were trying to find their way home, only it wasn’t going to plan… 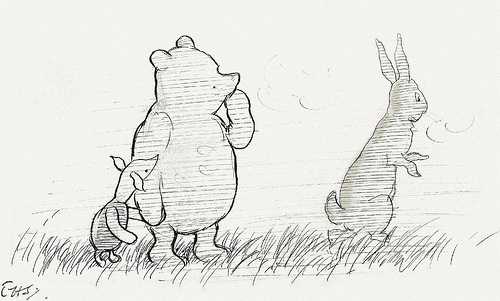 “The fact is,” said Rabbit, “we’ve missed our way somehow.”

They were having a rest in a small sand-pit on the top of the Forest. Pooh was getting rather tired of that sand-pit, and suspected it of following them about, because whichever direction they started in, they always ended up at it, and each time, as it came through the mist at them, Rabbit said triumphantly, “Now I know where we are!” and Pooh said sadly, “So do I,” and Piglet said nothing. He had tried to think of something to say, but the only thing he could think of was, “Help, help!” and it seemed silly to say that, when he had Pooh and Rabbit with him.

“Well,” said Rabbit, after a long silence in which nobody thanked him for the nice walk they were having, “we’d better get on, I suppose. Which way shall we try?”

“How would it be,” said Pooh slowly, “if, as soon as we’re out of sight of this Pit, we try to find it again?”

“What’s the good of that?” said Rabbit.

“Well,” said Pooh, “we keep looking for Home and not finding it, so I thought that if we looked for this Pit, we’d be sure not to find it, which would be a Good Thing, because then we might find something that we weren’t looking for, which might be just what we were looking for, really.”

“I don’t see much sense in that,” said Rabbit. … “If I walked away from this Pit, and then walked back to it, of course I should find it.”

Rabbit gave a laugh to show how silly Piglet was, and walked into the mist. After he had gone a hundred yards, he turned and walked back again… and after Pooh and Piglet had waited twenty minutes for him, Pooh got up.

“No,” said Pooh. “But there are twelve pots of honey in my cupboard, and they’ve been calling to me for hours. I couldn’t hear them properly before, because Rabbit would talk, but if nobody says anything except those twelve pots, I think, Piglet, I shall know where they’re calling from. Come on.”

They walked off together; and for a long time Piglet said nothing, so as not to interrupt the pots; and then suddenly he made a squeaky noise …and then an oo-noise …because now he began to know where he was; but he still didn’t dare to say so out loud, in case he wasn’t. And just when he was getting so sure of himself that it didn’t matter whether the pots went on calling or not, there was a shout in front of them, and out of the mist came Christopher Robin. 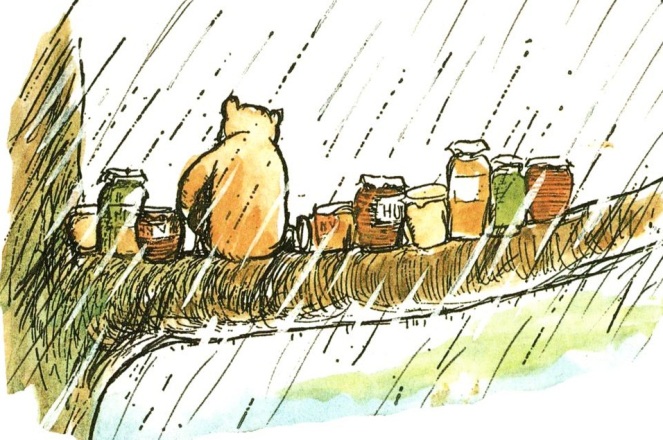 One thought on “Pooh Follows the Honey of Intuition”