To celebrate Chinese New Year and the Year of the Monkey, I thought it would be fun to explore the background to one of my favourite TV shows: Monkey. It’s a cult classic and was on TV during my formative years in the 70s. We would rush home from ballet class (don’t ask) because I couldn’t bear to miss it – this was before we got a video recorder and long before digital catch-up. I remember re-enacting scenes from the show in the playground at school, throwing myself off a bench and screaming, “Monkey!”

I grew up wanting to be Monkey, but didn’t realise how much impact that crazy show would have on my life. The Buddhist teachings got under my skin while I was busy enjoying the fights, the bad make-up and wobbly sets. It was only later that I discovered the story was based on the real-life adventures of Xuanzang, the monk who brought Buddhism to China during the Tang dynasty.

The Road Carrying the Jewel of Truth

Xuanzang was born into a Confucian household in around 602 in a village near Luoyang. This was also where the first Buddhist temple in China – The White Horse Temple – was built. It was established in the year 68 after the Emperor Ming supposedly had a dream about a man with gold skin surrounded by the sun, moon and stars. His advisors interpreted the dream to mean the Buddha, so the Emperor sent some of his minions to find the teachings. They returned from Afghanistan with two Buddhist monks who then began to translate the scriptures into Chinese.

So when Xuanzang was born, Buddhism was already established and he was ordained as a novice monk at the age of 13, becoming a full monk at age 20. After much study, be became concerned about the numerous discrepancies and contradictions he found in the translations of the scriptures, and decided to go to India to study there. But the Emperor Taizong of the Tang dynasty had banned foreign travel unless you had a permit. In his writings, Xuanzang says:

“I was inflamed by a passionate curiosity about the Buddha and about the origins of the faith and I applied for a foreign travel permit several times to no avail. Perhaps because I was a nobody. In the end, I took matters into my own hands and I left in secret for India.”

He goes on to describe how he had to travel like a fugitive, under cover of darkness, to dodge the border guards. The journey took him along the Silk Road (what the Chinese called the Road Carrying the Jewel of Truth), through the Gobi Desert, over the mountains into Afghanistan, and then through Pakistan into India. Once there, he made his way to Bodh Gaya to see the Bodhi Tree where the Buddha attained enlightenment:

“And when I saw it, I lay on the ground and shed many tears.”

Xuanzang stayed in India for many years, travelling and studying the scriptures. When he returned to China, he brought back 657 books in 570 packages on 20 pack horses. The Great Wild Goose Pagoda in Xi’an was built to house the manuscripts, written in Pali on palm leaves. There are only a few fragments left now as most were lost in various wars and revolutions.

Xuanzang spent the rest of his life translating the scriptures, and the Emperor forgave him for leaving China without a permit and asked him to become prime minister and help run the country. But Xuanzang wasn’t interested and turned him down, saying:

“It would be like taking a boat out of the water. Not only would it cease to be useful, but in time, it would rot away.”

Journey to the West

Xuanzang’s pilgrimage took on legendary status in China and inspired the 16th century classic novel Journey to the West by Wu Cheng’en. The story dramatises his real adventures and mixes them with Chinese folk tales and mythology into a spiritual allegory about the search for enlightenment. It’s a great comic fantasy adventure tale which, according to Chinese storytellers, would take 110 days to tell in full. It has been endlessly adapted into books, films, plays, comics, TV, and dance.

The story features the adventures (or should that be misadventures?) of the monk Tripitaka on his pilgrimage to India to get the holy scriptures, assisted by Monkey and two fallen angels, Sandy and Pigsy. They’re also accompanied by a dragon who takes the form of a horse, which Tripitaka rides. Together, they encounter monsters, demons, bandits and all manner of setbacks, learning lessons of Taoist and Buddhist philosophy on the way.

In the West, the book is known by the name Monkey, after the translation by Arthur Waley. Many more know the tale through the Japanese TV series made in the 1970s, and dubbed into English by the BBC. Colin Teevan adapted a play based on Monkey for the Old Vic theatre in 2001, and said,

“It’s the story of the genius and the self-destructiveness of mankind. Monkey is ingenious and witty and violent and impatient. He wants enlightenment and he wants it now, but he does not know that one must journey and suffer to attain it.”

Every episode begins with a description of the mythical origins of Monkey, plus a tiny splash of Buddhist teaching:

“In the worlds before Monkey, primal chaos reigned. Heaven sought order. But the phoenix can only fly when its feathers are grown. The four worlds formed again and yet again, as endless aeons wheeled and passed. Time and the pure essences of Heaven, the moisture of the Earth, the powers of the sun and the moon all worked upon a certain rock, old as creation. And it became magically fertile. That first egg was named ‘Thought’. Tathagata Buddha, the Father Buddha, said, ‘With our thoughts, we make the world’. Elemental forces caused the egg to hatch. From it then came a stone monkey. The nature of Monkey was irrepressible!”

The Japanese TV series is an anarchic and joyful blend of spectacular fight sequences, dodgy special effects, and terrible but hilarious dubbing, with a funky soundtrack. Tripitaka is the moral centre of the story and tries to keep everyone in line and teach them how to be good Buddhists, but it’s Monkey who is the true hero of the story.

“There’s nothing so stubborn as a Buddhist, nothing so stupid as a priest. I mean, what’s he worshipping? Gods? I met the gods – bloody boring bunch!” – Monkey 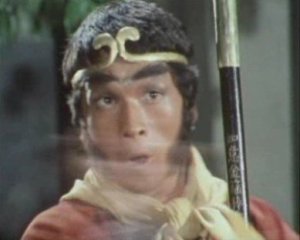 Monkey is the original superhero, fighting against evil and defending the weak and helpless. Also called King Monkey, and Great Sage Equal of Heaven, he’s known for his large sideburns and stubbornness. Monkey has many magical powers that he learned from an old Taoist master. He can transform tufts of his fur into almost anything and often creates dozens of mini Monkey fighters. Early in the story he receives a magic wishing staff that he shrinks to fit in his ear or makes large enough to clobber demons (in the book, this is the iron pillar that anchors the Milky Way). He loves to fight and knows kung fu and bojutsu. And best of all, he has mastered cloud flying.

Monkey isn’t a normal monkey because he was born from a stone egg. He’s a trickster, rebellious and full of restlessness. He has wit, intelligence and courage, as well as great strength and perseverance, but needs to learn self-discipline and selflessness. Monkey represents the ‘monkey mind’ in Buddhism that must be tamed. 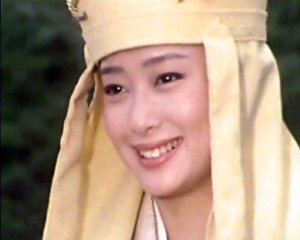 Tripitaka is nothing like the real Xuanzang. He’s a Mahayana Buddhist and also called the Holy Fool and Boy Priest. He represents the ordinary man searching for liberation from the wheel of suffering. Tripitaka often gets the others into trouble due to his kind nature. He’s fearful and indecisive and often fooled by the demons they encounter because he wants to see the best in everyone and be compassionate. As one episode title says, “Even monsters can be people.”

Early in the story, Tripitaka puts a gold headband on Monkey so he can control him. When Monkey tries to go off and get up to mischief or refuses to do what the monk asks, Tripitaka recites a sutra and Monkey gets a splitting headache. The headache sutra might not seem very compassionate, but it’s the only way his ‘monkey mind’ can be brought under control. Training the mind isn’t easy!

(And yes, for those of you who haven’t seen the show, Tripitaka was played by a woman: actress Masako Natsume) 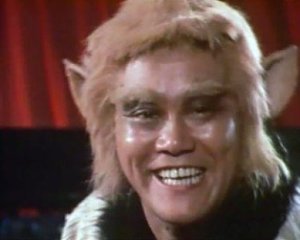 Pigsy used to be the Martial of the Heavenly Host, but was punished by the gods for getting too friendly with the Moon Princess. He’s banished to earth as a Pig Spirit, known for his pig snout and huge appetite. Pigsy likes beautiful women (a little too much), eating and sleeping. He’s sensual and lazy, and symbolises the physical desires of lust and gluttony. But he’s also very strong and handy in a fight. 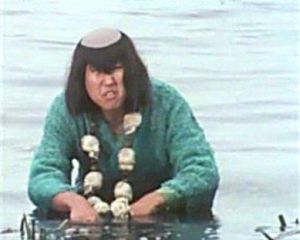 Sandy used to be the Commander of the Heavenly Host, but was banished from heaven for breaking the jade cup. He becomes a Fish Spirit or Water Monster (also known as a Kappa), and is forced to become a cannibal because, as he explains, he never had an education and only knows how to be an angel. He’s known for his bald patch and skull necklace. Sandy overthinks everything and philosophises all the time. He’s very logical and polite, and symbolises sincerity and wholeheartedness, qualities that are needed on the path to enlightenment. 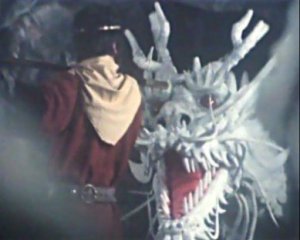 Horse – actually a dragon in disguise. Horse used to be a white water dragon who was sentenced to death by his own father for setting fire to his great pearl. He was rescued by Guan Yin (the goddess of mercy – a bodhisattva of compassion), but then accidentally ate Tripitaka’s horse because he was peckish. After a short fight with Monkey, the dragon agrees to become a horse to carry Tripitaka on his pilgrimage. Horse doesn’t say much because he’s shy.

In the book, Monkey eventually learns to let go of his selfish ways, but the TV series didn’t get that far. It ran for two seasons and the pilgrims never quite made it to India – too many demons to fight.

I’ll finish now with a clip from the first episode: ‘Monkey Goes Wild About Heaven’. After calling himself Great Sage Equal of Heaven, Monkey gets into trouble for eating all the peaches in the Garden of Immortality in heaven. He’s fighting (as usual) and causing a ruckus, so Buddha intervenes and offers Monkey a wager…

*UPDATE: this video has been removed from YouTube – you’ll just have to buy the DVDs!*

Monkey is trapped under the mountain for 500 years to learn patience, and the episode ends with Monkey shouting to the Buddha: “You’re doing it to yourself, don’t you see? It’s YOU that’s stuck here!” 😀

The quotes from Xuanzang came from the excellent Michael Wood series: The Story of China

6 thoughts on “Monkey Magic! or How Buddhism came to China”