There are many versions of The Handless Maiden from around the world. It’s a fairy tale that was collected by the Brothers Grimm in 1812, but its roots are much older. This telling is my adaptation of the tale with gratitude to Clarissa Pinkola Estes. Read the introduction to this series here or follow the links to explore each part of the story in more depth. The links will go live as the posts go up… 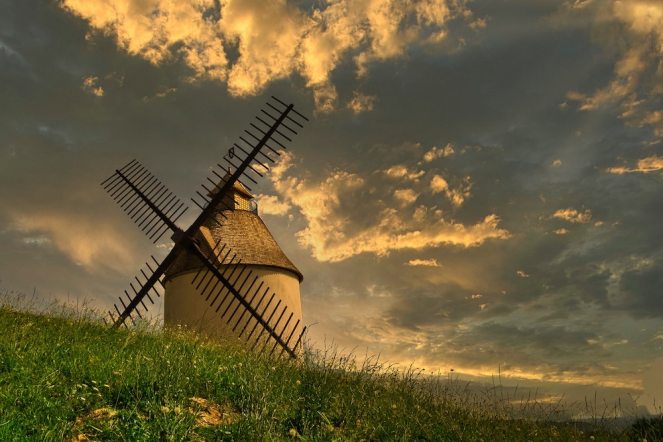 Once there was a miller who had fallen into poverty. His mill was broken so he had to go to the forest to chop wood. One day, when he was hacking at a tree stump, an old man appeared and said, “I’ll make you rich if you give me what stands behind your mill.”

The miller assumed the old man was talking about the apple tree out back, so he agreed to the deal, dollar signs flashing in his eyes. The old man told the miller he would return in three years to take what was his, and then he vanished.

The miller returned home, and his wife asked about their newfound wealth. The house was filled with expensive furniture and their clothes were new, and clean! Better than that, the mill was working again, faster and more efficiently. The miller, grinning ear to ear, explained about the old man and the apple tree.

But the miller’s wife was horrified. “You stupid old duffer,” she cried. “Our daughter was standing behind the mill, and that old man was the devil!”

Indeed, the miller’s daughter was hanging out beside the apple tree, beautiful, pious and oblivious to her fate…(see part 1)

At last, the dreadful day arrived when the devil would come to claim his payment: the maiden. That morning, the girl washed and drew a circle around herself with chalk. The devil appeared, but couldn’t come near her. Furious, he demanded she must not wash herself again, and then he left.

When the devil returned the next day, the maiden wept and wept and her tears ran down her arms to her hands, washing her clean. So the devil still couldn’t touch her. Enraged, he ordered the girl’s father to cut off her hands so she couldn’t weep on them.

The miller was shocked and tried to refuse, but the devil threatened to kill him, his wife, and everything around the mill. Quaking in his boots, the miller approached his daughter and begged her forgiveness. She replied, “I am your daughter, do with me what you will.” The miller took his sharpest axe and cut off both her hands.

The maiden wept and wept and her tears ran down her arms and mingled with the blood that poured from her stumps. When the devil returned once more, he tried to claim his prize but still couldn’t touch the maiden for her tears had washed her stumps clean. Muttering darkly to himself, the devil slunk off back into the forest…(see part 2)

The devil retreated to the forest and the maiden’s parents did their best to care for their daughter. Her father begged her to stay, promising to provide everything she could ever want or need, but she refused. She had her bloody stumps cleaned and bound in fresh white gauze, and then set out towards the forest.

The maiden wandered this way and that, not knowing where she was going. She walked all day and stopped at nightfall. She had arrived at a royal garden, and in the moonlight could see trees covered with fruit. She was so hungry she could barely stand, but she couldn’t enter the garden because it was surrounded by a moat.

She fell to her knees, famished. Suddenly an angel appeared, a beautiful spirit in white, who made a dam in the water. After a short while, the moat dried up and the maiden was able to walk across and enter the garden. There she saw lines of trees heavy with ripe pears, but she couldn’t reach them with her stumps.

One of the trees, perceiving her need, bent a branch towards the maiden. And so, using only her mouth, she was able to eat a pear, the juice running down her chin. The angel stood watch as the maiden ate.

Across the garden, hiding behind a tree, stood the gardener. He also watched the maiden and the spirit by her side, but he didn’t interfere. He knew magic when he saw it and let the maiden be. Finally, after eating just one pear, the maiden retreated across the drained moat and disappeared into the forest…(see part 3)

The next day, the king was walking in his garden, counting his pears, for he knew exactly how many were on each tree, when he realised that one was missing. He called the gardener and questioned him. The gardener explained to the king what he had witnessed the night before. A spirit without hands had been led into the garden by an angel and had eaten one of the pears.

The king was curious and so that night decided to watch the garden and took his magician with him. He waited until the moon was high in the sky before he saw a strange sight. Out of the forest came a maiden without hands, accompanied by an angel who led her across the dry moat and into the garden. Once there, the maiden began to eat a pear, just as the gardener had described.

The king rushed to the maiden and promised not to forsake her and took her to his castle. He loved the maiden with all his heart and had a pair of silver hands made for her, and then took her as his wife. And so the maiden became a queen with beautiful silver hands…(see part 4)

The queen stayed in the castle and the king lavished her with love and care. But in time, he had to leave to wage war in a distant land. Before he left, the king asked his mother to take care of the queen, for she was expecting his child. She must send a letter as soon as the child is born.

Some months later, the queen gave birth to a beautiful son, and the king’s mother immediately sent a letter with the good news. But the messenger fell asleep by a river along the way. While he was dozing, the devil, who was still brooding over his humiliation in losing the maiden, exchanged the real letter for another. The devil’s message informed the king that the queen had given birth to a monster.

When the king received the letter, he was shocked but sent a reply asking his mother to take care of his wife at this terrible time. But once again, the messenger fell asleep on his journey. While he dozed beside the river, the devil exchanged the message once more and ordered, “Kill my wife and child.”

The king’s mother couldn’t believe her eyes when she received the letter, so she sent another message to the king, asking for clarification. But the devil played the same trick again and switched the messages, there and back. Finally, the king’s mother received a letter that ordered her to save the queen’s eyes and tongue to prove to the king that she had been killed.

By now, the king’s mother believed her son had gone quite mad, what with the war and everything, and she had no intention of killing the queen. Instead, she killed a deer, removed its tongue and eyes, and saved them. The king’s mother then told the queen that she and her baby son were no longer safe in the castle. The queen must run and go far away, and never return…(see part 5)

The queen and her son were no longer safe in the castle, and so, with the baby bound to her breast, the queen bid farewell to the king’s mother. Weeping, she left the castle and returned to the forest.

She wandered, not knowing where she should go or where she would be welcome. She prayed for guidance and an angel appeared on the path.

The angel led the queen to a cottage deep in the woods. Over the door was a sign which read, “Here all dwell free.” A maiden dressed in white came to the door and greeted the queen. She welcomed the queen and the baby into her home and took care of their every need.

The queen lived in the cottage in the woods for seven years.

One day, as the queen bent over a stream to drink, the child fell from her arms into the water. Frantic, she called for help and an angel appeared. The angel wanted to know why the queen did not rescue her child. “Because I have no hands,” she replied. The angel smiled and said, “Try.”

As the queen plunged her arms into the water and reached for her child, her hands regenerated, and the child was saved…(see part 6)

Soon after the queen left the castle, the king returned from the war, but the queen and his child weren’t there waiting for him. He asked his mother where they were. She was furious with him, and said, “How could you? I did as you ordered, you lunatic!” She showed him the eyes and the tongue, and the terrible letters he had sent.

The king was shocked and heartbroken. He almost fell over in his grief. When his mother saw the anguish on the king’s face, she realised the letters were not from him. She quickly explained that his wife and child were still alive and that she had sent them into the forest. The king vowed to find them and said, “I will not eat or drink until I find my wife and child.”

The king left the castle and wandered for seven years. As he searched for his wife and child, his hands and face became blackened with dirt, and his beard grew wild until he looked more animal than man.

Finally, he came to a cottage in the woods with a sign that read, “Here All Dwell Free.” A maiden dressed in white invited the king inside. He was so exhausted from his search that he lay down and covered his face with a handkerchief.

The king slept deeply, and as he slept, the handkerchief slipped from his face. He awakened to find a beautiful woman and a small child gazing down at him.

The woman smiled, for she recognised the man, despite the ingrained filth and crazy beard. “I am your wife and this is your son,” she said. The king wanted to believe her but couldn’t help noticing her hands. She explained, “With grace, my hands have grown back.” The maiden in white retrieved the queen’s silver hands from a trunk and showed them to the king.

The king was overjoyed and embraced his long-lost queen and greeted his son warmly. All three returned to the king’s mother, who helped to arrange a second wedding. In time, they had many more children and lived happily ever after…(see part 7)