I hope you’ve been working hard on your Saturn in Capricorn lessons because the end of class test is coming in 2020 and you need to be ready. In 2019 we have the slow build towards the Saturn Pluto conjunction in Capricorn when things could get extremely serious. The year has a heavy, restrictive feel with some optimism and hope thrown in to help keep you going. But 2020 is set to be a hell of a year, so now is the time to sort yourself out. 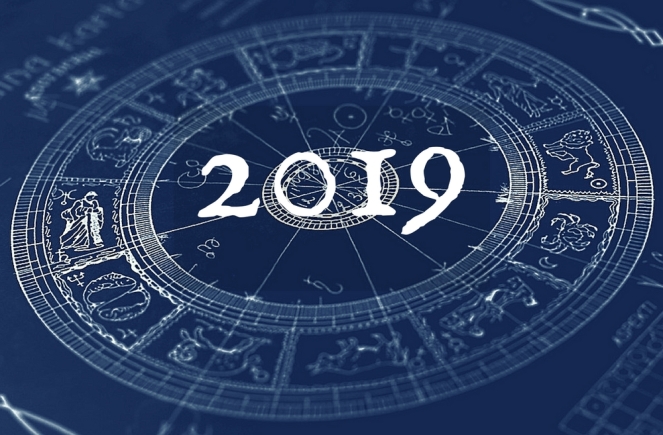 The whole year is underpinned by the Saturn Pluto slow dance in Capricorn as they move towards conjunction. The alignment is in orb through most of the year and slowly grinds closer together, especially in the last couple of months as we approach 12 January 2020. Pluto moves back and forth over the degree of the conjunction (22° Capricorn) from February to July, seeding the energies to come.

In June, both Mercury and Mars transit opposite Saturn and Pluto. Saturn is hit first by Mars on 14th, then by Mercury on 16th. Then Mercury opposes Pluto on 19th and Mars follows on 20th. This isn’t a good time to do something important or get something started, so if you have plans this year, get them underway before the middle of June. It doesn’t necessarily mean that everything will go wrong, but whatever you’re doing could be challenged. You may encounter a few bumps in the road, or even roadblocks that you have to work around. It depends on the other transits to your chart and where these alignments fall – so check the house positions to see which areas will be affected.

Saturn Pluto alignments highlight the use and abuse of power and resources. They often coincide with periods of economic contraction, the collapse of long-standing structures, natural disasters like earthquakes and volcanoes, and war. The conjunction is happening along with Uranus in Taurus which can also trigger disruption to the financial system and an increase in volcanoes kicking off. Read the full post on Uranus in Taurus here.

The Saturn Pluto conjunction also occurs on the south nodes of both planets and this will intensify the effect. With everything that’s been happening around the world recently, it’s highly likely things could get dramatically worse into 2020. We’re seeing an increase in authoritarian control by governments and the long-term effects of austerity and social injustice. None of that is about to improve soon.

Saturn Pluto has the potential to become your worst nightmare of war, economic collapse, death and misery. But it doesn’t have to be that way. The only reason it usually plays out negatively is because we mismanage the energies due to ignorance and wilful nefariousness. We have the option of learning from the past and choosing to change – if we take it.

At best, it’s a time to take responsibility for yourself and be your own authority. That doesn’t mean you get to make stuff up and believe whatever you want to be true. The structures in your life have to be based in reality or Saturn and Pluto will force you to change. Read the full post on Saturn in Capricorn here, and Pluto in Capricorn here. More on the Saturn Pluto conjunction here.

Thankfully, it’s not all doom and gloom because we also have Jupiter trundling happily through his own sign.

Jupiter entered Sagittarius in November 2018 and stays there until 2 December 2019. This transit lightens the mood of the year but won’t banish the dark clouds of Saturn Pluto completely – and that might be a good thing.

Jupiter in Sagittarius is a time of growth and optimism when you can sense new possibilities for the future and have an increased faith in life. It’s a good time to find positive ways to improve your life and expand your horizons, whether inner or outer. Aim high and take advantage of opportunities through travel, sport, higher learning, religion and philosophy.

Jupiter is dignified in its own sign so it should be a mostly positive experience, but be careful of getting too big for your boots. Your optimism could mutate into arrogance and overconfidence, and you might assume you can’t fail. This may be less of a problem with Saturn and Pluto in Capricorn and Uranus in Taurus because all that earthy energy will help to keep you grounded.

Make the most of this transit by applying the lessons of Saturn in Capricorn to reality check your inspirations and dreams. Saturn can motivate you to work hard to make your dreams real by giving them form and structure. And Jupiter can inspire you to change a difficult situation by finding hope and removing the fears that stop you from taking action.

How this transit plays out for you depends on which house Jupiter is transiting in your chart – see Jupiter Transits in the houses here.

The north node entered Cancer in November 2018 and leaves in May 2020. This means the south node is in Capricorn so the eclipse cycle will boost the effect of the Saturn Pluto conjunction. With the north node in Cancer the focus is on your feelings and need for family, roots and nurturing. It brings up areas of imbalance between Cancer and Capricorn, such as family and career, home and work, feelings and duty.

The south node in Capricorn brings up issues around authority, control, responsibility and the structures in your life. You need to be realistic and work towards your goals, but not at the expense of your home life and family. You might need to take a break from the grindstone and nurture yourself more. It’s an opportunity to remember why you’re working so hard to create meaningful structures that support your life.

There are three eclipses in Cancer/Capricorn in 2019:

Check your chart to see if any of these eclipses activate important points in your horoscope.

Jupiter square Neptune: a period of spiritualising your belief systems and social structures that could involve a process of disillusionment. This alignment is exact on the following dates:

With Jupiter square Neptune there’s a conflict between fantasy and reality which tends to increase confusion and self-deception. This transit dissolves old belief systems so you could experience changes to your spiritual practice or philosophy. Your consciousness could expand making you feel inspired and uplifted. You may feel optimistic and full of hope, but your expectations could be unrealistic. Be careful of idealism, illusion and escapism, and try to keep your expectations grounded in reality.

This is a good time for creative work and spiritual practice, but they’ll work better if you’re not trying to get something out of it. Neptune encourages selflessness so if your beliefs are self-serving, you’re likely to run into trouble. See Jupiter Neptune transits for more.

Saturn sextile Neptune: a period of turning ideals into reality and giving form to your dreams and imagination. This alignment is exact on the following dates:

With Saturn sextile Neptune the ideal and the real can work harmoniously together. This transit helps you to put your dreams and spiritual ideals into practice. It’s a good time to practice meditation, get involved in social work and helping others, or work hard to give your creative projects form and structure.

This transit may help to clarify the confusion from the Jupiter Neptune square. Each Saturn alignment happens shortly after the Jupiter ones, so you could find out pretty quickly if you’ve gone astray because Saturn will bring you back down to earth. Take the opportunity to make adjustments as necessary.

The next alignment between Saturn and Neptune will be the conjunction in 2026, which is the end of this cycle and the start of a new one. Whatever you complete now, will be tested then. See Saturn Neptune transits for more.

Thankfully we don’t have to deal with the retrograde overload we had in 2018 because both Venus and Mars are now happily powering forwards again. However, in April both Jupiter and Saturn go retrograde, so if you need to get projects off the ground or start anything important, do it before then. You won’t necessarily have problems if you do it after that, but it might take a little longer. Jupiter turns direct in August and Saturn follows in September, so it’s only a few months – nowhere near as bad as last year.

This year Mercury retrogrades in water signs which means it’s a good time to rethink your emotional habits, heal old wounds, and let go of the past. The retrogrades fall in March, July, and October/November. Here are the specifics:

Check your chart to see which areas could get disrupted. For more read: A Guide to Stealing Fire During Mercury Retrograde

To finish the year, Jupiter joins Saturn and Pluto in Capricorn on 2 December and stays there until December 2020. This transit represents the paradox of expansion through contraction. In other words, you’ll benefit by cultivating the Capricorn qualities of discipline, responsibility and duty, being grounded in your body and building long-lasting structures that support life.

Jupiter expands whatever it touches so it’s a good time to improve your social status and material security, invest in your future prospects and take more responsibility for yourself and how you serve the community. You might be able to get a better job or a promotion, or perhaps you’ll be rewarded for work you’ve already done. You’re more likely to experience success with established projects or things you’ve been working on for a while.

You can learn from experience and gain greater understanding of how the established order of society works. Now is the time to take responsibility for yourself and stop expecting people in positions of authority to do it for you. The Saturn Pluto conjunction will challenge us to face how we’re living together on this planet. All the things we can no longer avoid will come up from the depths and demand to be fixed.

So get ahead of the curve and start looking at your part of the puzzle now. Get organised. Do a personal inventory and decide whether you’re living up to your fullest potential. Are you doing what you need to be doing? Take responsibility for your shit and get ready.

Things are likely to get worse before they get better – but they will get better. There’s a light at the end of the tunnel with the upcoming Jupiter Saturn conjunction in Aquarius at the end of 2020.

If you want to write be a Sublime Fool…