We’ve almost made it to the end of the year and we’re not out of the woods yet. I hope you’re all hanging in there and not getting sucked into the maelstrom of madness that’s tearing through cities and psyches around the world. The beauty of astrology is that it reminds you that everything goes in cycles – what goes up, must come down, and vice versa.

The horrible oppressive feel of the current moment won’t last. The cause of all the bother is the Mars square to the Saturn Pluto conjunction which fades away by February. Things will still feel tense going into 2021 but in a different way – perhaps more revolutionary rather than full-on boot in the face oppressive.

Here’s a great graphic from the Astrology Podcast for September showing the transits for 2020 illustrating the problem, courtesy of Archetypal Explorer. 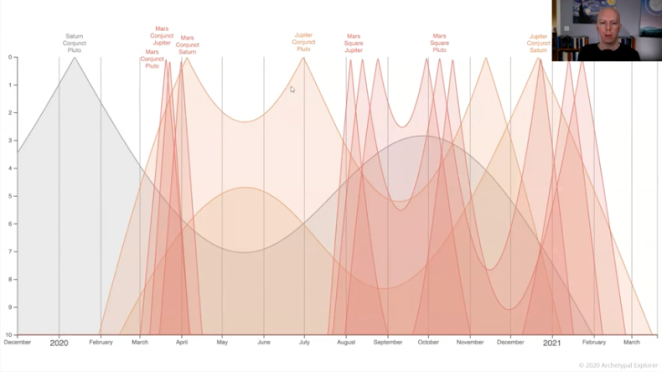 The last quarter of the year is relentless. The Saturn Pluto conjunction remains in orb until January while Mars stirs things up with a barrage of transits as he goes through his retrograde cycle in Aries. More on how to deal with Mars Retrograde here. Here are the specific dates to watch for:

The Mars Saturn square can be frustrating and even explosive. This one feels particularly oppressive and tense because Saturn is the dominant planet, giving Mars very little room to move.

This oppressiveness can be mitigated by working with it and not allowing yourself to feel victimised by it. No matter how bad things get, you always have choices. They may not be easy choices and it may take effort to make them, but you can do it.

You need to work with Mars Saturn, not just endure it. Use the energy to build resilience and strength, such as working on long-term projects that require perseverance and patience, or building a supportive health and exercise regime, and so on. Read Saturn Transits to Mars for more on how these aspects work.

The background to all this tension is the Saturn Pluto conjunction which was exact back in January. Here’s the bullet list of nasties that I included in my post about the history and archetypes of these transits – it pretty much covers everything we’ve seen this year so far – written in June 2019:

This transit has been fed and boosted out of any sense of proportion by the Jupiter Pluto conjunction which is also still in play. The final pass happens on 12 November, just before Mars goes direct. This transit has contributed to the massive overreach and abuses of power we’re seeing in various countries. The consequences are already painful for many and probably set to get worse.

For more on the Saturn Pluto conjunction and surrounding issues read:

Underneath all this, we have the transits of Pluto, Neptune, Uranus and Saturn, which provide the deep bass notes to our alchemical transformation. Here are a few notes on each as a reminder – for more, follow the links to read the full posts:

Pluto in Capricorn – ends in 2024, so there’s still a way to go yet. This represents the death and rebirth (but mainly death!) of the old system, the structure of society, power and authority. Evolutionary forces are tearing down old empires and vested interests are fighting to hang on to power. On a personal level, this is about reforming how you use your power so you can take responsibility and be your own authority. More here.

Neptune in Pisces – ends in 2026. This represents the dissolution of our illusions as the fantasies that we base our civilisation on crumble as the veil gets thinner. It provides the potential for spiritual awakening but also mass psychosis, collective insanity and a confrontation with the collective shadow. On a personal level there’s a need to develop compassion and extreme discernment. More here.

Uranus in Taurus – also ends in 2026. This represents the disruption of security, food supplies, farming, and finances. A revolution in banking is about to go into overdrive with the push for a cashless society and UBI on the back of the breakdown of the old system. On a personal level, there’s a need to assess and revolutionise our values and how we live on the earth and the potential for sudden revelations and breakthroughs. More here.

Saturn in Capricorn – ends in December. The next few months represent the last chance to grow up and take responsibility and walk your talk. Now is the time to build the life you want – it may be harder now than before, but with effort and discipline, you’ll be surprised by what you can accomplish. This is an opportunity to live with greater integrity and simplicity. More here.

Incoming transit: Saturn Uranus square – the first aspect hits in February 2021 but it builds from December this year and runs until 2023. This represents the sudden collapse of structures and economies, revolutions, civil unrest, and the fight for freedom. It could be a rude awakening to the reality of the current system and a crisis in consciousness, both collectively and individually. More on the history and archetypes here, and more on the square here.

Incoming transit: Jupiter Saturn conjunction – arrives with massive fanfare in December right on the solstice. This is a big deal. It represents the start of a new cycle and the Great Mutation into air setting up the next 200 years. It signals the end of empire building and power based on accumulating land and resources, and the start of a transition into a new model of power sharing. I’ll be writing more about this later in the year so watch this space.

I’m also preparing a post on the transits for the coming decade – lots of big changes afoot, so it could take a while to put together. In the meantime, read up on Saturn in Aquarius here.

Whatever life brings over the coming months, keep your cool and remember: this too shall pass.

Be smart. Be strong. Remember who you are. This is the perfect time to wake up and stay awake.

5 thoughts on “Current Transits – this too shall pass…”