‘Where are we going?’ said Pooh, hurrying after him, and wondering whether it was to be an Explore or a What-shall-I-do-about-you-know-what. 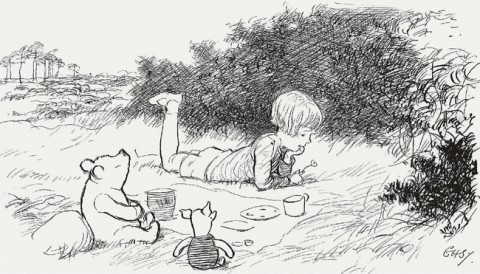 So they began going there, and after they had walked a little way Christopher Robin said:

‘What do you like doing best in the world, Pooh?’

‘Well, said Pooh, ‘what I like best…’ and then he had to stop and think. Because although Eating Honey was a very good thing to do, there was a moment just before you began to eat it which was better than when you were, but he didn’t know what it was called. And then he thought that being with Christopher Robin was a very good thing to do, and having Piglet near was a friendly thing to have; and so, when he had thought it all out, he said, ‘What I like best in the whole world is Me and Piglet going to see You, and You saying “What about a little something?” and Me saying, “Well, I shouldn’t mind a little something, should you Piglet,” and it being a hummy sort of day outside, and birds singing.’”

‘How do you do Nothing?’ asked Pooh, after he had wondered for a long time.

‘Well, it’s when people call out at you just as you’re going off to do it, What are you going to do, Christopher Robin, and you say, Oh, nothing, and then you go and do it.’

‘This is a nothing sort of thing that we’re doing now.’

‘It means just going along, listening to all the things you can’t hear, and not bothering.’

– from The House At Pooh Corner

2 thoughts on “The Art of Doing Nothing”