The stone age temples dug into a hill near Sanliurfa in Turkey are causing a storm. It’s not often we find something that overturns everything we know, but Gobekli Tepe is a genuine mystery. Archaeology and history are being rewritten. Not that you’d know about it. The discoveries haven’t been suppressed, they’re just not being reported – much.

I came across Gobekli Tepe while doing research for my second novel, The Shining Ones. I was looking into shamanism and ancient history, trying to ferret out the earliest languages and cultural developments, and up popped these mysterious temples. The stone circles were like nothing else I’d ever seen. The people who built them lived in a world we can hardly imagine.

The temples were built around 10,000 BCE using nothing but flint tools. The T-shaped pillars stand up to 18 feet high, and many are carved with beautiful depictions of animals and abstract symbols. Each temple has two massive T-shaped pillars standing side by side in the centre, and these have anthropomorphic carvings of hands, as well as what looks like a belt and buckle. There are no faces, and the lead archaeologist Klaus Schmidt thinks they represent the earliest gods:

“They have no eyes, no mouths, no faces. But they have arms and they have hands. They are makers. In my opinion, the people who carved them were asking themselves the biggest questions of all. What is this universe? Why are we here?” – from article: 7,000 years older than Stonehenge

What makes Gobekli Tepe such a rich source of new and baffling information is that the temples were buried around 8,000 BCE. Nobody knows why – perhaps they had outlived their usefulness, or the religion had changed rendering them obsolete. But it does mean the temples were perfectly preserved. Some of the carvings look like they could’ve been made last week! 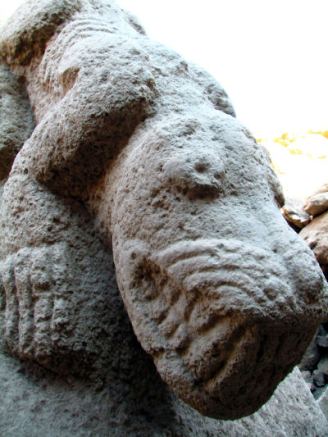 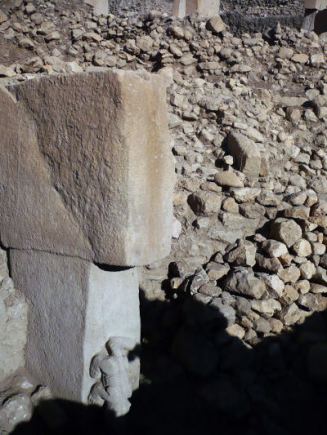 With the discovery of Gobekli Tepe all our ideas and beliefs about the stone age world of hunter gathers were demolished. We didn’t believe the people of 12,000 years ago were organised enough to build something this complex. They must have had a well-defined hierarchy and craftsmen capable of producing such beautiful sculptures. The temples are aligned with the stars and it’s likely that the shamanic rites practised there were based on the earliest pillar or pole star religions found around the world. [ See my post: The Origins of Christmas: Part 2 – Shamanic Roots for more on this ancient belief system. ]

All this requires long cultural development over time. Temples don’t spring fully formed out of nowhere. People used to wonder at the origins of the civilisations of Sumer and Egypt – they seemed to appear from nowhere, with fully developed mythologies and beliefs. But earlier cultures have since been found, and now the temples at Gobekli Tepe take us all the way back to the end of the Ice Age.

I could go on about this for ages, so I’ll leave you with a video. Gobekli Tepe: The World’s First Temple was produced and directed by Ahmet Turgut Yazman for Maker Arts. It’s a fascinating film which covers the science and archaeology, as well as astronomy, history, religion, and mysticism of the site.

It’s just over an hour, but well worth watching (bookmark this page and come back later if you like!), and you’ll want to choose captions for English subtitles.